VATICAN CITY (RNS) Bishops must exercise closer supervision over Catholic charities and ensure that their activities do not contradict church doctrine, according to new rules issued by Pope Benedict XVI on Saturday (Dec. 1).

The new guidelines state that charities with links to the church must “follow Catholic principles in their activity” and may not “accept commitments” that could undermine those principles in any way. 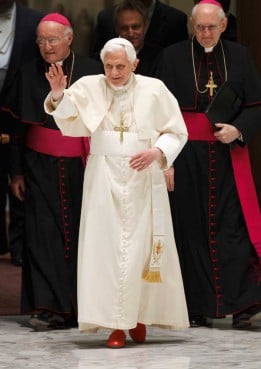 Pope Benedict XVI waves as he arrives to lead his general audience in Paul VI hall at the Vatican Feb. 8.

They also bar charities from accepting funding “from groups or institutions that pursue ends contrary to the church's teaching” or for initiatives that are “not in conformity with the Church’s teaching.”

Should an organization fall short of these requirements, the local bishop must intervene to alert the faithful and “prohibit that agency from using the name 'Catholic.'”

The new rules for Catholic charitable organizations around the world was published in a papal letter titled, “The Service of Charity,” and they are aimed at ensuring that a group's activities “avoid the risk of becoming just another form of organized social assistance.”

The rules require, among other things, that personnel “share, or at least respect, the Catholic identity” of the organizations and that they give “an example of Christian life.”

Bishops must also make sure that salaries in Catholic charities are set at levels consistent with the “Christian simplicity of life.”

The rules follow a recent trend that has seen the Vatican promote stricter oversight of the church's aid groups and social organization. Last May, for example, the Vatican asserted closer control over Caritas Internationalis, the umbrella organization of 162 national Catholic charities.

In the United States, some bishops have withdrawn funding or support for the Catholic Campaign for Human Development, an annual collection that funds anti-poverty programs, many of them with little or no direct connection to the church.

In 2010, the U.S. Conference of Catholic Bishops adopted reforms to ensure that no funds are "used to support any activity which conflicts with fundamental Catholic moral and social teaching."

Responsibility for compliance with the new rules has been entrusted to the Pontifical Council “Cor Unum,” the Vatican department that oversees the church's charitable activities.

The Rev. Larry Snyder, president of Catholic Charities USA, said that while the new rules formally affirm the bishops' authority over church-affiliated charitable organizations, the activity of most charities in the United States won't be dramatically affected.

“There are cases where the Catholic identity needs to be strengthened and this is a concern of the Holy Father,” he said.

Snyder also stressed that the limits on funding will need further clarification. He cited the case of the Gates Foundation, one of the world's largest private donors, as an example: “They fund Caritas organizations throughout the world for very good and specific objectives. But they support family planning, too.”

Some bishops say Catholic charities shouldn't accept money from groups like the Gates Foundation. According to Snyder, the effect of the new rules in such cases "will depend greatly on the individual bishop's interpretation."