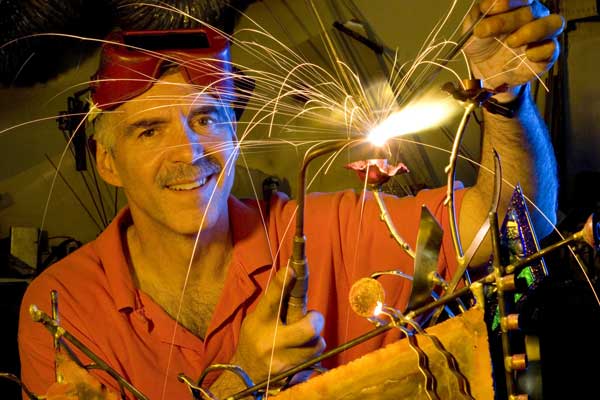 But they know that in the weeks leading up to Hanukkah, their quick and expert manipulation of glass, copper and steel is crucial to getting a truckload of Judaica out the workshop door each day and into the homes of Jews around the world. 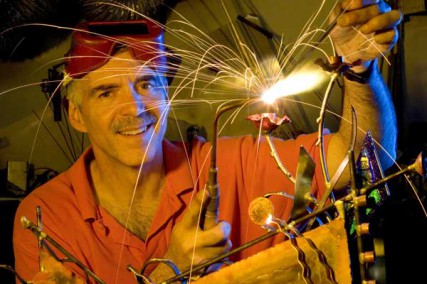 Gary Rosenthal sells his ritual objects, all handmade in his suburban Washington studio, in stores and online to Jewish families, schools and synagogues.

The men -- both 51 and diagnosed with autism -- work for one of the biggest names in contemporary Jewish art. Gary Rosenthal sells his ritual objects, all handmade in his suburban Washington studio, in stores and online to Jewish families, schools and synagogues.

Work for the company’s 15 employees has been hectic lately. In time for Hanukkah, which begins on Saturday (Dec. 8), they labor to finish about 60 menorahs a day, along with other essentials of a Jewish home that are often given as gifts for the holiday: the mezuzahs that Jews are commanded to place on the doorposts of their homes, candleholders used every Friday for Shabbat, and the tzedakah boxes for the collection of charity.

A metal mezuzah from the Gary Rosenthal Collection.

Rosenthal, who belongs to a Reform synagogue, said he runs a Jewish business in two ways. Most obviously, he makes Jewish art, and follows the rabbinic teaching of “hiddur mitzvah.” “It’s the mitzvah (worthy deed) of beautifying Jewish ritual,” he said.

Then there’s his personal take on Judaism, which shapes his business model. It’s steeped in his love of Jewish art and a drive toward social action, which helped put Linder on the payroll nine years ago and Welsh four years later.

Linder, who lives in a group home and works at Rosenthal’s studio six hours a day, three days a week, spends much of his time there working the press brake, a machine into which he inserts a thin piece of metal which gets slammed into just the right shape for a tzedakah box.

He’s quiet and calm at this task, and there’s a rhythm to the bang of the machine. A colleague who works close by knows Linder would prefer not to gab. A visitor’s questions set Linder pacing to calm himself.

When Linder is not making the tzedakah boxes, he weaves copper and other metals for the mezuzahs. It’s a close, repetitive craft, well suited to him, said Jackie Nah, a manager at Community Services for Autistic Adults and Children, the local social service agency that connected the two men with Rosenthal. 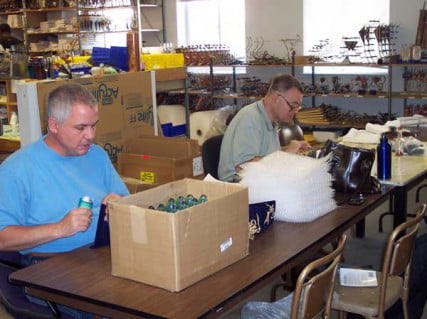 Tim Welsh, left, wraps the glasses he makes for grooms to stomp on at the conclusion of Jewish wedding ceremonies. John Linder weaves metal strips into mezuzot, which Jews put on the doorposts of their homes.

“If you know John, you can sit down with him and he can tell you how he feels. We know he enjoys his work because he tells us,” Nah said.

Welsh’s happiness at work is more obvious. He’s quick with a smile, and likes to lunch with his colleagues, often peppering them with questions -- deep questions, said Suzanne Gartner, who is in charge of the glass studio.

“He asks if there’s a heaven -- he lost both of his parents -- and if people make fun of other people there or whether all people are treated equally,” Gartner said. “We always say ‘yes' there’s a heaven, and no one gets teased."

In some ways, Rosenthal’s labyrinth of workrooms is a little bit of heaven for those who work there. Everyone takes the work seriously but is free to be themselves. Employees speak Spanish, Russian and English. They play Christmas songs on the radio if they like. A yappy poodle mix named Albee weaves his way through the art and the employees, incessantly demanding that someone throw him a ball.

Welsh came to Rosenthal’s studio quite shy five years ago, Gartner said. But the staff was patient with his questions, and responded gently to his social missteps. They respected his need for clear directions, uniformity and routine. Among other jobs, Welsh makes the vibrantly colored glasses -- 60 a week -- that grooms stomp on at the end of Jewish wedding ceremonies. Gartner occasionally drops one. 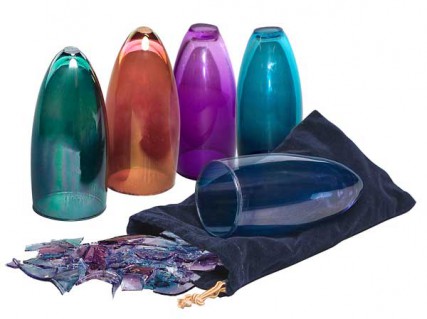 A sampling of Gary Rosenthal glasses that are used during Jewish wedding ceremonies.

“He’ll come in the next day and the first thing he’ll notice is that there are 59. And he’ll tell me, and he’s very distressed,” said Gartner, who taught emotionally disturbed children before she came to work for Rosenthal.

When the goblets arrive at Welsh’s workbench, they are clear and stemmed. Paint must be applied to the glass’s interior surface evenly to get just the right effect. After they’re fired, he snips their stems with a diamond cutter, and they’re ready for a Jewish wedding.

Only Rosenthal, his mother, and one other employee in the shop are Jewish, but every employee’s spirit is infused in the art, Rosenthal said. A 59-year-old self-taught artisan with an MBA from University of Virginia, Rosenthal doesn’t do much artistic work himself these days, but presides over the business and what he calls “social ventures,” projects that he originally thought might make him some money by doing good.

He weaves social action into the business model, sometimes serendipitously, and sometimes, quite purposefully. In the 1980s, when the former Soviet Union agreed to let hundreds of thousands of Jewish “refusniks” out of the country, Rosenthal put several of them to work.

On the first Hanukkah after Hurricane Katrina, he sold menorah-making kits to 20 synagogues around the country, had the congregants donate their work, and drove to New Orleans where he gifted the menorahs to 500 Jewish families and threw them a giant Hanukkah party.

A decade ago, a client suggested he take on employees with autism.

“We make art not just to make something,” Rosenthal said. “It is to bring people together.”