PASADENA, Calif. (RNS) Leaders of a flagship progressive Episcopal church are defending themselves against charges of sympathy for terrorists in their decision to host the annual Muslim Public Affairs Council convention.

All Saints Church has received dozens of emails accusing it of condoning terrorism for hosting MPAC's 12th annual convention on Dec. 15, the first held in a Christian church. 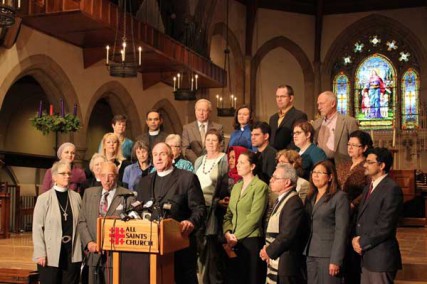 Ryan Mauro, national security analyst at RadicalIslam.org, contends that MPAC is “taking advantage of naive Christians,” and that Islamists seek to protect themselves from critics by forming an “interfaith bloc.” He criticized MPAC statements on the Israeli-Palestinian conflict, and accused its leaders of being part of a Muslim Brotherhood plot to destroy the West from within.

While many Muslims in the public eye have come to expect such condemnation, other religious leaders feel a responsibility to stand up to concerted efforts to demonize Muslims. “This is not just a few random cranky Christians,” the Rev. Susan Russell, a senior associate of All Saints Church, told reporters on Thursday (Dec. 6).

“Just because it's directed at Muslims now, doesn't mean it's not going to be directed to other faith communities at other times,” added Rabbi Sarah Bassin, executive director of NewGround, a Muslim-Jewish dialogue organization.

Still, All Saints Rector Edwin J. Bacon Jr. said the emails to All Saints were unexpected.

“We've received so much joy and reinforcement from living an interreligious life, so we simply hadn't been aware that this would cause offense for some people,” he said, standing at the All Saints altar with about 25 interfaith leaders. “It's bringing us some very good advertisement, talking about our mission.”

Salam Al-Marayati, MPAC's president, said that the criticism has given the conference so much free publicity that part of the marketing budget will be transferred to provide extra security.

Al-Marayati invited anti-Islam activists to the convention. “We can remove that hatred and prejudice in your heart and replace it with understanding,” he said.