WASHINGTON (RNS) The Supreme Court’s decision to take up the explosive issue of same-sex marriage will thrust the high court into a policy debate that has divided federal and state governments and courts, as well as voters in nearly 40 states.

The court’s agreement to hear challenges to the federal Defense of Marriage Act and California’s Proposition 8 ban on same-sex marriage moves the issue to the top of the national agenda following a year in which advocates scored major legal and political victories.

The court likely will hear the cases in March and rule by late June on a series of questions, potentially including one of the most basic: Can states ban gay marriage, or does the Constitution protect that right for all couples? It also will decide whether gay and lesbian married couples can be denied federal benefits received by opposite-sex spouses.

Any decisions will make history on an issue that has divided the nation for decades. Nine states and the District of Columbia now permit same-sex marriages, and a decision against California’s Prop 8 ban would add the 10th and largest state.

A ruling against the 1996 federal law could lead to a spike in gay marriages in all those states. Several more states are likely to consider allowing same-sex marriages in 2013.

While a ruling in the California case could be confined to that state, it holds the most potential for a sweeping national precedent. If Prop 8 is overthrown on constitutional grounds, it could impact some 31 other state bans on gay marriage as well.

“It’s been our belief all along that the ultimate fate of Proposition 8 will be in the hands of the Supreme Court,” said Andrew Pugno, general counsel for the advocacy group ProtectMarriage, which sought the high court’s intervention.

“I fully believe that this court’s going to come down on the side of freedom and equality,” said Chad Griffin, president of the Human Rights Campaign, which fights for gay, lesbian, bisexual and transgender rights. 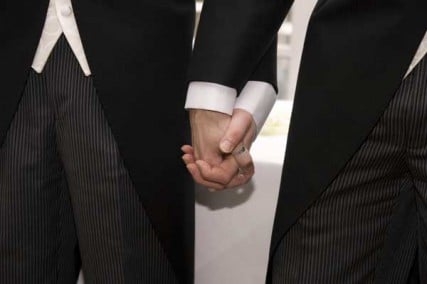 The Supreme Court’s decision to take up the explosive issue of same-sex marriage will thrust the high court into a policy debate that has divided federal and state governments and courts, as well as voters in nearly 40 states.

The state Supreme Court cleared the way for gay marriages in California four years ago, and about 18,000 couples quickly took advantage. The voter initiative that passed several months later, however, has blocked more nuptials pending the completion of court action.

The original lawsuit against Proposition 8, filed by a gay couple and a lesbian couple who seek to marry, has racked up two lower court victories. The district court said the law violated the Constitution’s equal protection clause because it was “premised on the belief that same-sex couples simply are not as good as opposite-sex couples.” The appeals court ruled more narrowly that voters could not take away a right that gays and lesbians previously enjoyed.

Yet even if the Supreme Court sides with gays and lesbians, opponents of same-sex marriage say it won’t end the debate.

“The majority of Americans who have voted to protect marriage as the unity of a man and a woman are never going to go away,” said Brian Brown, president of the National Organization for Marriage. A Supreme Court ruling in favor of same-sex marriage, he said, “would launch a national culture war.”

In the Defense of Marriage Act challenge, the justices chose from among several overlapping cases. The plaintiffs in those cases – married couples, widows and widowers in states where gay marriage is or previously was legal – are seeking the same federal benefits accorded opposite-sex couples, from joint tax returns to survivor benefits.

The justices chose the case of Edie Windsor, an 83-year-old widow in New York’s Greenwich Village who had a 40-year engagement and brief 20-month marriage to her lesbian partner, Thea Spyer. Windsor went to court after being socked with more than $500,000 in state and federal inheritance taxes that an opposite-sex spouse would not have had to pay.

“We look forward to presenting our case, and we believe we have a very strong case,” said Roberta Kaplan, Windsor’s lawyer.

The 1996 law has two main sections, only one of which — defining marriage in federal laws as between men and women — is being contested. Because of it, benefits and programs enjoyed by opposite-sex couples aren’t available to gays and lesbians under federal employment, health, tax and other laws. (The other provision shields states from having to recognize gay marriages from other states.)

Attorney General Eric Holder announced last year that the Obama administration considered DOMA unconstitutional and no longer would defend it in court. House Republicans stepped into the breach to argue — to no avail thus far — that the law saves needed federal resources and ensures they are distributed equally among the states.

Other arguments go closer to the difference between gay and straight couples: procreation. A coalition of 15 states filed a brief in one of the DOMA cases asserting that “the different procreative capacities of same-sex and opposite-sex couples support a constitutionally legitimate distinction for defining marriage and affording special benefits to its participants.”

The central issue for advocates of same-sex marriage comes down to questions of due process and equal protection. They say prohibitions serve no governmental objective or legitimate purpose — they don’t make life or marriage any better for heterosexuals.

After 10 consecutive lower court cases in which federal judges ruled on the side of gays and lesbians, a Nevada district court judge held last month that there is no constitutional right to same-sex marriage.

“That gives us enormous hope that the Supreme Court will swiftly affirm what these courts have all said,” said Evan Wolfson, executive director of the advocacy group Freedom to Marry.