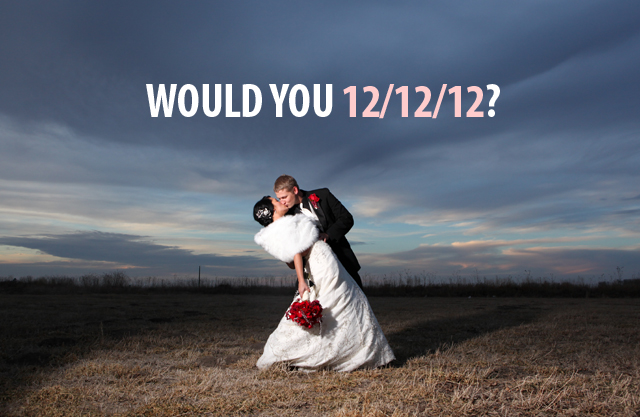 Two hundred couples took advantage of the date by getting married at a Chinese temple in Kuala Lumpur. They say it's because 12/12/12 is auspicious. Also, the gents have no excuse for forgetting their anniversary.

Speaking of dates, the world will not end on Dec. 21, the Vatican's top astronomer said yesterday, contrary what you might have heard about the Mayan Calendar.

That hasn't stopped Turkish tourists from flocking to a Greek town believed to have positive doomsday energy, whatever that is.

They know there's only like, two popes, right? So after recruiting the Coptic pope, that person is out of a job.

A liberal Catholic group wanted Benedict to tweet about the fiscal cliff. Good luck with that.

Speaking of Twitters, the pope isn't the only religious leader who tweets.

Across the pond, the British government unveiled a proposal that excludes the Church of England from planned legislation to allow gay weddings in churches.

Pity, those weddings might've been the only action in those sanctuaries. The 2011 census says the number of Christians in England and Wales has fallen by 4 million over the last 10 years.

A Sikh guardsman at Buckingham Palace became the first to trade in his pointy bearskin hat for a turban.

Nearly 20 percent of the hate crimes committed in the U.S. last year were motivated by religious bias, according to the FBI's annual report.

The world’s largest group of Orthodox rabbis praised the process that led to the conviction of a Hasidic Jewish man on sexual abuse charges in Brooklyn.

The new show "Amish Mafia," is filled with "foolishness and stupidity and lies," according to Amish experts. Really, what's next? The Real Housewives of Lancaster?

Federal officials have decided to resolve a controversy over a 10-word inscription on the Martin Luther King Jr. Memorial by removing it altogether.

A 90-year-old menorah from a temple on Long Island that was ravaged by Hurricane Sandy will be displayed at a Hanukkah party hosted by President Obama as a symbol of perseverance.

Speaking of storms, a Dutchman has finally finished his 20-year quest to build an ark. Now comes the hard part. Two by two...

Mormon feminists have declared Sunday, Dec. 16, "Wear Pants to Church Day."  In response, some LDS men are asking: Can we next do a No Neckties Day?

Bishop Walter Sullivan, one of the last in a dying breed of liberal American Catholic prelates, passed away on Tuesday.

Confession is not just good for the soul, it's good for society, according to researchers at two English universities.

We confess, we would very much like you to sign up below to receive our free Religion News Roundup.