WASHINGTON (RNS) More than a third of Americans believe the severity of recent natural disasters is evidence that we are in the “end times” described in the New Testament — a period of turmoil preceding Jesus' Second Coming and the end of the world.

“There is a significant proportion of Americans who see these phenomena through a theological lens,” said Daniel Cox, research director at the Public Religion Research Institute, which released a poll on religion and climate change on Thursday (Dec. 13) in partnership with Religion News Service.

“It's hardly a fringe belief. It’s nearly four in 10 Americans who are embracing this,” Cox said. 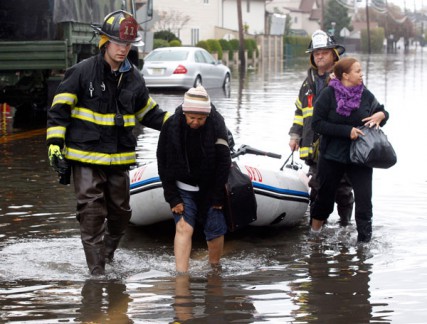 The conviction is particularly strong among white evangelical Protestants (65 percent), and less common among Catholics (21 percent) and the religiously unaffiliated (15 percent). Overall, 36 percent of Americans see signs of the end times in Mother Nature's fury.

But a majority of Americans connect recent extreme weather to climate change, according to the poll, which was conducted between Dec. 5-9, about six weeks after Hurricane Sandy wrecked havoc on the mid-Atlantic coastline.

More than six in 10 Americans (63 percent) say the severity of recent weather is evidence of global warming, compared to one third (33 percent) who disagree.

“They’re experiencing the same weather, but how they perceive it is very different,” he said.

The findings may buoy those who bemoan the nation’s unwillingness to make global warming a political priority — despite overwhelming evidence that burning fossil fuels and other human activity has led to rising global temperatures that threaten increasingly violent natural disasters.

Even so, advocates for action express concern about the large minority of Americans who see the severe weather in eschatological terms. These believers, according to the poll, are less likely to accept the human causes of climate change.

Peter M. J. Hess, the director of outreach to the religious community at the National Center for Science Education, said such a belief stymies progress.

“It’s theologically incoherent, scientifically wrong and weakens efforts to get public policy changed,” Hess said. “If you simply say, ‘It’s God’s will,’ it absolves people of taking serious responsibility for their actions.”

“I’m a Roman Catholic fairly well-educated in science, and any earthquake on the West Coast is to me not reflective of divine judgment,” said Hess, who lives within the Hayward Fault Zone, which includes cities and towns east of San Francisco.

On divine judgment, the survey found nearly one in three Americans (29 percent) believe God sometimes punishes nations for the political decisions of their leaders, though nearly two-thirds of Americans (65 percent) reject this idea.

When it comes to addressing climate change, 67 percent of Americans want the government to do more on the issue, with nearly seven in 10 young people (ages 18 to 29) favoring more robust government intervention, compared to 54 percent of seniors (age 65 and older).

While attitudes toward global warming have changed dramatically in recent years, the most recent trend is greater acceptance of the phenomenon.

Cox noted a 2006 study that showed that 77 percent of Americans believed there was solid evidence of the rising temperature of the Earth. That majority dropped precipitously to 57 percent in a 2009 study. In 2011, another PRRI study showed it at 69 percent.

In the poll released Thursday by PRRI, 75 percent of Americans said they agreed that the earth’s climate is getting hotter.

In other findings, the PRRI study revealed that:

— 2 percent of Americans believe in the ancient Mayan prophecy that the world will end by the end of 2012.

— 15 percent of Americans believe that the end of the world, as predicted in the Book of Revelation, will occur in their lifetimes.

— College graduates are four times less likely to believe the world will end in their lifetimes than those with a high school education or less.

— About three in 10 white evangelicals (29 percent) and minority Christians (27 percent) believe the end of the world will occur in their lifetimes. That belief is held by only 10 percent of Catholics, 8 percent of white mainline Protestants and 7 percent of religiously unaffiliated Americans.

The poll of 1,018 Americans had a margin of error of plus or minus 3.2 percentage points.