That cry has echoed ever since news of the horrific shooting at Sandy Hook Elementary School in Newtown, Conn.

As the names of those who died are made known, that cry is followed by a question: Why? Why does God allow evil? 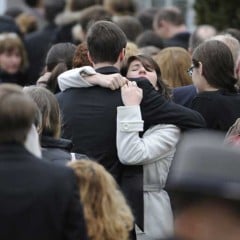 Mourners embrace outside Green Funeral Home in Fairfield, CT during the funeral for Noah Pozner, a victim of the Newtown shootings. RNS photo by Robert Deutsch, USA TODAY

This agonizing question arises among religious believers after tragedies great and small. It’s also one that priests, pastors, rabbis and imams will wrestle with.

The Rev. Jerry Smith of St. Bartholomew Episcopal Church in Nashville said that although this weekend marked the third Sunday in Advent, which focuses on hope in advance of Christmas, the church also has to talk about the reality of evil.

“We have to speak about this shooting and we have to recognize, this is the very darkness that Christ came into the world to dispel,” Smith told The Tennessean.

The Rev. Neill S. Morgan, pastor of Covenant Presbyterian Church in Sherman, Texas, says on the congregation’s website that now is a time for prayer.

But, says Morgan, “all the existential questions about God, justice and love” will come. “We wonder what we can do to prevent such violence in the world, our nation and our community.”

The struggle to understand the question of evil run throughout the Bible, and with stories that point from pain in this world to life in the hereafter with God. 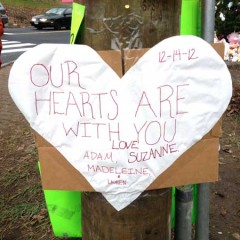 On social media, people are sharing a passage from Jeremiah 31:15-17:

It seems to fit the awful news of the deaths of 20 young children and six of the faculty at the Sandy Hook Elementary.

So do the lessons on theodicy — the question of evil in God’s good world — that are offered after every mass tragedy.

Rick Warren, the California megachurch pastor and best-selling author of the recently reissued best-seller “The Purpose-Driven Life,” addressed it last year on the 10th anniversary of the 9/11 terrorist attack.

Evil, the ugly twin of goodness, Warren wrote, is part of God’s “greatest blessing and our worst curse: our capacity to make choices.”

Rather than make humankind into puppets that he could pull by a string, says Warren, God granted free will so that he might be “loved and obeyed by creatures who freely, voluntarily choose to love him and each other. Love is not genuine if there is no other option.”

Many look for an answer in the Bible’s long-suffering Job, who is counseled to trust that God will work it out for the faithful, “which is not necessarily the most satisfying of answers,” writes Texas religion commentator Jeffrey Weiss.

Weiss took the question of evil very personally in an April piece for the website Real Clear Religion. He drew on a eulogy given by Rabbi Jonathan Miller at the funeral of a friend of Weiss’.

Miller did not attempt to explain the senselessness of a fatal illness. Wrote Weiss: “Theodicy, the attempt to rationalize why an all-good, all-knowing, all-powerful God would allow such pain, is the hardest nut to crack for religions that believe in that sort of deity.”

Instead, Miller shared a little-known Jewish story about how the fear of death should not destroy one’s joy in life. Memorial of candles, flowers, stuffed animals, and cards for the children and 6 adults who died at the Sandy Hook Elementary School in Newtown, Connecticut on December 14, 2012. RNS photo by Arthur McClanahan, Iowa United Methodist Conference

A great rabbi returns to a disciple in a dream and tells him, “Were the Holy One to say to me, ‘You may return to that world where you were before,’ I would not wish to do it. The fear of death is too great.”

The takeaway Miller wanted was for his listeners not to live in such fear of death that they cannot take the pleasure from living.

“Life is first for the living and not about dying,” Miller said.

(Cathy Lynn Grossman writes for USA Today. Bob Smietana of The Tennessean contributed to this story.)

News
Wheaton mental health summit remembers Jarrid Wilson’s ‘legacy of hope’
Culture
Kay Warren to host annual gathering for survivors of suicide
Opinion
Don’t romanticize suffering following the Aurora mass shooting
Opinion
What dying children can teach America about responding to shootings
News
Christian author Lysa TerKeurst faces her greatest fears
© Copyright 2020, Religion News Service. All rights reserved. Use of and/or registration on any portion of this site constitutes acceptance of our User Agreement and Privacy Policy, Privacy Statement and Cookie Notice. The material on this site may not be reproduced, distributed, transmitted, cached or otherwise used, except with the prior written permission of Religion News Service.