WASHINGTON (RNS) Though the number of death-row inmates executed in 2012 remained unchanged from 2011 at 43, death penalty opponents said the year still showed capital punishment is on the wane.

Connecticut this year upped the number of states to repeal the death penalty to 17. Some states that have had relatively high numbers of executions in the past executed no one this year, or issued no new death sentences. 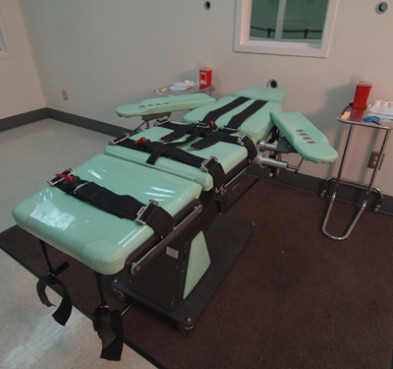 “Capital punishment is becoming marginalized and meaningless in most of the country,” said Richard Dieter, executive director of the Death Penalty Information Center, which released a new study on the death penalty Tuesday (Dec. 18).

“In 2012, fewer states have the death penalty, fewer carried out executions, and death sentences and executions were clustered in a small number of states. It is very likely that more states will take up the question of death penalty repeal in the years ahead,” Dieter said.

After the Supreme Court reinstated capital punishment in 1976, the execution rate reached a peak of 98 executions in 1999. Since then, the trend has been downward, and attributed in part to some high-profile cases in which death row inmates have been found innocent after DNA testing.

After serving 15 years on death row, Damon Thibodeaux was freed in September from Louisiana State Penitentiary after DNA evidence cleared him of the crime. He was the 300th person exonerated by DNA evidence in U.S., and had the help of the Innocence Project, a nonprofit that labors to free the wrongly convicted.

Such cases “open the eyes of everyone that there are some mistakes in the system that need to be fixed,” said Paul Cates, spokesman for The Innocence Project. “And this has critical consequences when you are talking about the use of the death penalty.”

Polls show falling public support for the death penalty, which, until recently, had enjoyed strong support. In an October 2011 CNN poll, 50 percent of respondents said they would prefer a sentence of life without parole over the death penalty for murderers — the first time that happened in CNN polling.

The poll also found that a large majority of Americans — 72 percent — believed that an innocent person had been put to death in the past five years.

Though some victims’ rights groups say fewer execution rates have more to do with falling murder rates than with growing revulsion with the death penalty, the Catholic Church, a strong opponent of the death penalty, hailed this year’s DPIC report as a strengthening of the anti-death penalty movement.

“The trend away from use of the death penalty is a hopeful sign that we are moving in the right direction on this issue,” said Anthony Granado, a policy adviser in the U.S. Conference of Catholic Bishops.

“The Church will remain unequivocally pro-life in its advocacy and continue to urge our nation to turn away from use of the death penalty, ” he said. “We reaffirm that as a society we cannot teach that killing is wrong by killing more people.”