For the last 25 years, the Trappist monks of Assumption Abbey here in the foothills of the Ozarks have made fruitcake. 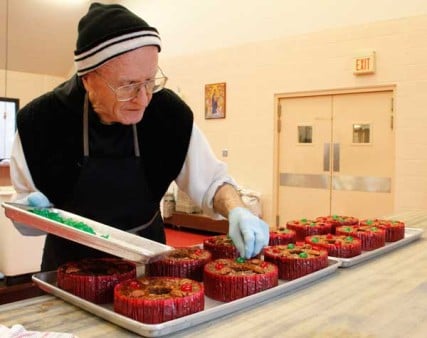 They’re less interested in profits than in eking out enough money to maintain their contemplative lifestyle.

This year, thanks to extra attention from local media, the monastery sold all of its cakes — a Christmas favorite — earlier than usual.

The fruitcakes sell for $31 each, and people from all over the world buy them. The monastery has shipped to places like the United Kingdom, Thailand and Japan. They also have a few wholesalers, including Williams-Sonoma.

As popular as their cakes are, they don’t expect to increase supply to meet higher demand.

“It’s possible, but we really don’t need to make a higher number,” said Brother Francis Flaherty, the monastery vocation director. “Our life is a balanced life of prayer and work.”

Joseph Reisch, the baker, cracks 265 eggs every morning, and soaks the fruit in burgundy wine. By 9 a.m., the cakes are in the oven. Across the room, another group decorates the previous day’s cakes.

When all the cakes have been injected with rum, coated in corn syrup and decorated — four pecan halves and four cherry halves top each one — they pray Psalms and say a special prayer over the fruitcakes:

“O God, Creator of all things

Bless now these creations of our hands,

That these cakes may be received

As tokens of your love

And shared with friends as hints

Of your Eucharistic feast.

We ask this in the name of Jesus Christ

Incarnate in our midst.”

They wrap each cake by hand, using wrapping stands made just for the bakery.

“Like putting a diaper on a baby,” said Brother Joe Manning, wrapping a cake.

Manning is one of the four Franciscan friars who live on the monastery property. They, along with a few bakery employees, help keep the bakery running. Michael Hogue, an employee, inspects each cake for quality before packing it in a tin. By sight, he can tell who’s wrapped each cake. 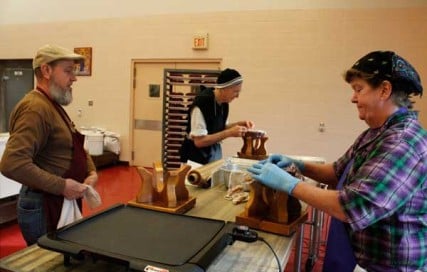 “That’s probably a Father Cyprian there,” he said, pointing to how the plastic wrap was crossed on the bottom of the cake.

Once packed,  the cakes age for at least two months before mailing.

“When you first make them, they taste like a fruity spice cake,” Reisch said. “Then, the rum subdues and mellows the particular flavors of the different fruits, and it kind of harmonizes things. There’s a real benefit that comes from the aging process.”

But while the popularity of Assumption Abbey fruitcakes grows, the number of monks is dwindling.

The oldest living monk at Assumption Abbey these days is 89 years old, and the average age is 80. There are 10 members, but only five live at the monastery. One is in a nursing home; two are away as chaplains.

Like other Catholic orders, the monks have struggled to draw modern Americans to their contemplative lifestyle.

“Everyone is short of vocations these days,” Flaherty said.

In February, four monks from Vietnam will arrive as part of a plan to transfer responsibility for the monastery.

Vietnam is “overflowing” with Catholics pursuing religious vocations, with  at least least 900 men and women there in the Cistercian order alone.

The Cistercian monastic order of the Roman Catholic church was formed in the 1100s, and there are 13 groups, or congregations, within it — most identified by nation.  The Trappists, like those at Assumption Abbey, are a reformed branch within the order that focuses on contemplation.

If all goes well, a few more Vietnamese monks will come to Missouri, and eventually, the monastery will be turned over to the Vietnamese Cistercians.

For now, the monks are taking their annual retreat. Fruitcake baking stops from mid-December through February. But once February comes, the new monks will arrive, and the baking will resume.

(Kellie Kotraba is the editor of Columbia Faith & Values, ColumbiaFAVS.com.)