VATICAN CITY (RNS) The Roman Catholic Church, trade unions and small business associations have joined forces in a bid to save Sundays.

In a bid to spur economic growth, outgoing Italian Prime Minister Mario Monti backed a new law that allows shops to stay open on the Sabbath. 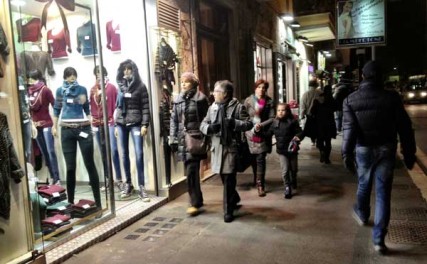 In what may seem an unlikely alliance, the Catholic Church, trade unions and Italian small business associations have joined forces in a bid to save Sundays from shopping and liberalized shopping hours. RNS photo by Alessandro Speciale

But Sunday traditions are strong in the European nation, and the change provoked strong resistance from religious and secular groups.

Last month, an Italian shop owners association and the country’s Catholic bishops’ conference launched a campaign to “free up Sundays.” They aim to gather the 50,000 signatures needed to try to repeal the liberalizing shop law.

Confesercenti, the shop owners association, fears that mom-and-pop stores – the backbone of the Italian retail sector – will be squeezed by large retailers and American-style malls.

The issue extends beyond Italy. In Brussels, dozens of religious groups – including the Catholic Church – unions and business associations from 27 countries have formed the “European Sunday Alliance” to lobby the European Union to keep Sunday as a continentwide day of rest, at least in principle.

Johanna Touzel, the alliance’s spokeswoman, said that setting Sunday aside is not necessarily a religious issue, and not discriminatory towards Jews and Muslims. “We need one day when everyone can rest – this is the origin of Shabbat. And in fact, even Muslim organizations support us.”

For the Catholic Church, keeping Sundays free from shopping and work concerns is of larger consequence than the economy.

The Rev. Marco Scattolon of Camposampiero, Italy, became an instant celebrity when he labeled Sunday shopping a sin and called on his parishioners to do penance for it. Sundays, he told the Corriere del Veneto newspaper, are important “not just in the religious sense.” “They are one of the few occasions left for families to be together.”

Bishop Antonio Mattiazzo of Padua sided with Scattolon while other bishops publicly signed the Confesercenti campaign.

“The broad consensus in opposing Sunday openings shows that having a common weekly day for rest is something that benefits everyone, not just believers,” says Luca Diotallevi, a Catholic sociologist who advises Italy’s bishops on social issues. “Sunday has not just a social value but a theological one too: Man needs to have a holy day.”

Others go even further in arguing for work-free Sundays.

Mimmo Muolo, a journalist for Italy’s official Catholic newspaper Avvenire, in his recent book, “Le feste scippate” (“The Stolen Holidays”), argues that “the 24/7 retail cycle has reintroduced a system of slaves and masters.” He said that employees who have no choice but to work on Sundays – and thus have no time for family and other social activities – are “Sunday slaves.”

At least in Italy, there are signs that few businesses have taken advantage of the reform.

Before the usual Christmas shopping rush kicked in, it was difficult to find many open shops on Sundays outside the tourist areas of the city centers.

“It is pointless because people don’t have enough money to spend,” says Anna Lucentini, 35, a saleswoman on one of Rome’s busiest commercial streets.

She says that the only result of the Sunday-opening reform is that employees will have to work more at their bosses’ request. “In Italy, those who still have a job are afraid to lose it and so let themselves be exploited without complaining.”

Still, opposing the liberalization of store opening schedules is winning the church some unexpected sympathy. Lorena Vargas, 21, just learned about the bishops-backed campaign. “For once, the church is doing a good thing,” she says. “I could even start going to Mass.”