(RNS) Add another holiday to the December dilemma — HumanLight. 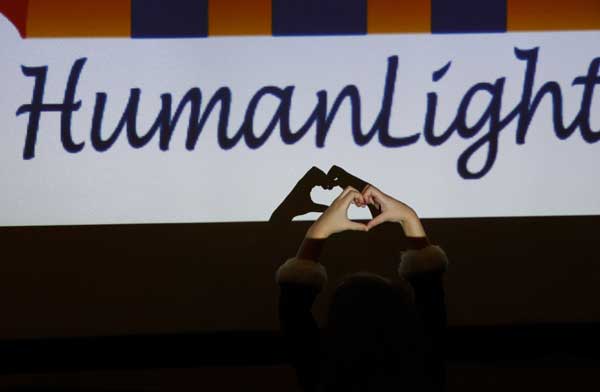 In addition to Christmas, Hanukkah and Kwanzaa, secular humanists have added a new celebration to the crowded calendar. HumanLight, observed on or about Dec. 23, is a secular celebration of human potential that is growing in acceptance.

This year, at least 18 groups, from New Jersey to Florida and Pennsylvania to Colorado, have ceremonies planned. And at least one government building that displays holiday scenes has added HumanLight to the roster: the county courthouse in Wabash, Ind., displays a yellow, white and red HumanLight banner on the same lawn as the Christian creche.

“The key to understanding HumanLight is to understand it is a holiday that is humanity-based,” said Patrick Colucci, vice-chair of The HumanLight Committee, a volunteer group which helps promote awareness of the holiday.

“It is about celebrating and experiencing a positive vision of the future that we believe humans can build together by working for a more just, more peaceful and a better quality of life for all.”

HumanLight evolved from meetings of the New Jersey Humanist Network, of which Colucci is a member. In the late 1990s, members began asking each other what they could do to celebrate during December.

“The December holiday period is always a discussion for those of us who are nontheistic,” Colucci said. “What are we going to do if our families want us to go to church? Should we celebrate Christmas even though we don’t want to? The question came up: How come there is no holiday for the nonreligious?” Patrick Colucci, vice chair of the HumanLight committee, speaks during the New Jersey Humanist Network’s HumanLight celebration in Morristown, NJ. This is the 12th annual observation which included music, speeches and science show for children. RNS photo by Amanda Brown.

They also wanted a way to celebrate that did not involve a man in a big red suit.

“It was an issue when families in our group started to have young children,” Colucci said. Try explaining to a five-year-old why you don’t celebrate Christmas, or Hanukkah.

“That is why HumanLight has a very strong focus on family and community and building that among humanists and the nonreligious,” Colucci said.

In 2001, the group held its first HumanLight celebration with a communal meal. It has evolved to include the lighting of three candles that represent reason, compassion and hope. A fourth candle represents the holiday itself.

“To help express the meaning of this holiday, we light candles, rather than curse the darkness,” Colucci read last weekend (Dec. 16) as he lit the candles for 90 HumanLight celebrants gathered in a New Jersey community center. “We light candles to symbolize lighting the way forward to a better future for humanity and for each other.” 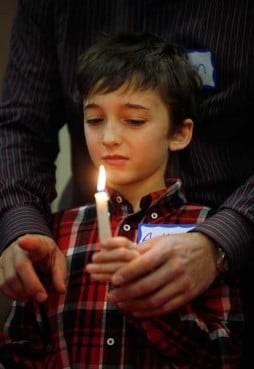 Anthony Valente, 8, of Maplewood, NJ, prepares to light a candle during the New Jersey Humanist Network’s HumanLight celebration in Morristown, NJ. This is the 12th annual observation which included music, speeches and science show for children. RNS photo by Amanda Brown.

After the first HumanLight observance in 2001, other humanist groups adopted it, too. There are no set practices, so many groups have developed their own. Today, HumanLight celebrations include science book exchanges, charity auctions, musical performances, and magicians and clowns for children. There are even HumanLight cards, ornaments and “carols.”

In Grand Junction, Colo., a group called Humanists Doing Good will mark the holiday by packaging food and hand-knit items for the homeless and distributing them in person on Christmas Day. Last year, for their first observance of the holiday, they delivered treats to people who had to work on Dec. 25.

“It was clear that it was often not necessarily the gifts that were making people’s day brighter,” said Jesse Bond, a member of Humanists Doing Good, “but the act of simply having people go out of their way to notice them and talk to them. It was also nice to feel like we were not being perceived as being engaged in any ‘war on Christmas’ or raging against the nativity scene.” 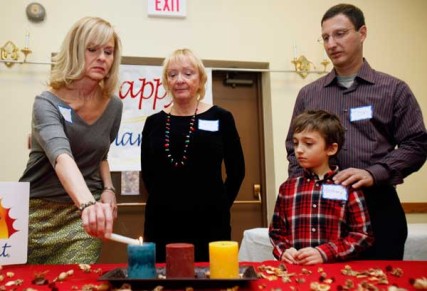 (Left to right) Ellen Johnson, of Stanhope, NJ, Carol Shields, of Bridgewater, NJ, Anthony Valente, 8, and his dad Tom, of Maplewood, helped to light the candles during the New Jersey Humanist Network’s HumanLight celebration in Morristown, NJ. The three candles that are lit represent reason, compassion and hope. RNS photo by Amanda Brown.

Observances of HumanLight are still few and far between — only 30 groups reported celebrations in 2010 — but it’s growing. Leaders of several national nontheist organizations have recently endorsed the holiday, including Roy Speckhardt, executive director of the American Humanist Association.

Not everyone is rushing to light the candles. Tom Flynn, executive director of the Council for Secular Humanism and author of “The Trouble With Christmas,” recently listed six reasons the nonreligious should shun all December holidays.

Among the reasons, fears of conformism.

“Nonreligious people make themselves disappear when they cling to a ‘me too’ holiday so as not to be seen with nothing special to do towards the end of December,” Flynn said.

“We’d further increase our visibility by ignoring the holiday and pressing our employers to leave the office open on December 25.”