WASHINGTON (RNS) At a time when the ideals of compromise and collegiality seem like a distant dream in the nation’s capital, an unusually diverse coalition of religious leaders is asking Americans to pray for civility. 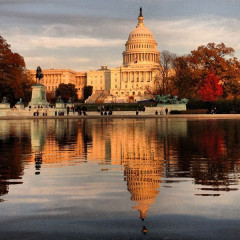 The U.S. Capitol building at sunset. *Note: This image is not available to download. RNS photo by spleeness via Flickr (http://flic.kr/p/dvwqfk).

“Through daily prayer, we are calling on the ‘better angels of our nature’ needed to sustain our nation and solve problems,” said the Rev. Peg Chemberlin, immediate past president of the National Council of Churches and one of the faith leaders taking part in “18 days of Prayer for the Nation.”

Prayers begin Thursday (Jan. 3), the first day of the new Congress, and end on Jan. 21, the day of President Obama’s second inauguration.

Faith leaders from left, right and center have signed on, including Episcopal Presiding Bishop Katharine Jefferts Schori, Richard Land of the Southern Baptists’ Ethics and Religious Liberty Commission and Richard Cizik, president of the New Evangelical Partnership for the Common Good.

The Faith & Politics Institute, a nonpartisan group that nurtures the spiritual life of members of Congress and their staffs, and presses political foes toward civil debate, organized the days of prayer and an online “commitment to prayer” page to document participation.

It lists 27 clergy and others on day one, including Eboo Patel, a Muslim American who founded the Chicago-based Interfaith Youth Core, and Rabbi Steve Gutow, president and CEO of the Jewish Council for Public Affairs.

Lisa Sharon Harper, director of mobilizing for the progressive Christian group Sojourners, left her prayer on the page, which reads in part: “Dear God, please move in the hearts of our legislators. Ignite in them a deep desire for the common good. Give them courage to lead and not merely follow the direction of the pundits and polls.”

Though various faith groups often separately encourage prayers for the country, such as the evangelical National Day of Prayer Task Force, it is rarer for so broad a group to organize a sustained national period of prayer.

The idea grew out of the institute’s 2012 “Better Angels Summit” of clergy from across the ideological spectrum. “Prayer partnerships” were forged at the summit, and one — between Chemberlin, of the Moravian Church in America and Pierre Bynum of the conservative Family Research Council — became the impetus for this month’s national call to prayer.

Those behind the initiative say they hope Americans, no matter their faith, pray for a climate where political leaders, among other virtues, “are quick to listen, slow to speak, and slow to become angry,” and “avoid attacking the character of others or falsely impugning their motives.”