SALT LAKE CITY (RNS) After years of tension between Mormons and gay rights activists — with political action and theological pronouncements on one side, protests and pain on the other — the gulf between the two groups has begun to narrow.

The Church of Jesus Christ of Latter-day Saints has acknowledged that homosexuality is neither a choice nor a sin. It has supported anti-discrimination ordinances in Utah communities, stayed away from the 2012 battles against same-sex marriage in four states, and launched a website to soften the rhetoric about homosexuality and allow gay Mormons to tell their stories. 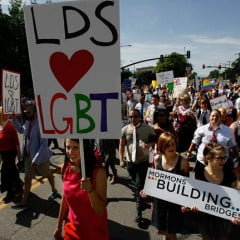 In the midst of that warming trend came more than 300 straight Mormons in their Sunday best, marching in Utah’s 2012 Gay Pride Parade, right behind “Milk” screenwriter Dustin Lance Black and before the drag queens.

They called themselves Mormons Building Bridges. They were not out to debate politics or doctrine, organizers said, but to promote love and listening.

Still, their simple yet potent gesture echoed around the globe, setting an example for fellow believers who then took up the style, if not the name, in 15 other gay pride parades.

“It feels like something clicked in June 2012,” says John Gustav-Wrathall, an excommunicated gay Mormon in a long-term same-sex relationship who nonetheless regularly attends weekly LDS services in Minneapolis. “This was a galvanizing moment. It fired everyone up.”

Mormons typically view gay pride parades “with loathing and disdain,” says Gustav-Wrathall, who became involved early on with Bridges. “It was electrifying that there would be a large contingent marching in Salt Lake City. And I figured if they can do that there, we can do it anywhere.”

Attending church feels different now, he said. “The mood has shifted, a new tone has been struck. It is now safe for Mormons to talk openly about homosexuality, and Mormons Building Bridges played a key role in that.”

Erika Munson, a straight, married Mormon mom who moved to Utah from Connecticut in 2009 and came up with the Bridges’ idea, is a reluctant revolutionary.

Like other Mormons, Munson was troubled by her church’s highly publicized push for California’s Proposition 8 in 2008, defining marriage as exclusively between a husband and a wife. She watched helplessly as gays left the faith, resigned to the fear that there seemed to be no place for them in the pews.

And she saw her children struggle with the dissonance between the church’s teachings about love and what they saw as its rejection of LGBT fellow believers.

In January, Munson decided she needed to do something, anything, so when she learned that the pride parade was the second largest in the state,  she impulsively reserved a space.

“There is an exponentially growing number of Mormon hearts that are turning toward compassion,” he says. “We turned that into action.”

During the Prop 8 campaign, Dillard “didn’t know what to make of all the gay Mormon stuff, so I ducked and covered. I kept my distance,” she says. “But it didn’t sit well.”

Organizers knew there might be push-back against Bridges from the gay community -- for years, the LDS church considered homosexuality itself a sin, encouraged young gay men to marry women and supported efforts such as “reparative therapy” as a way of changing same-sex orientation.

Wilcox, who worked at church-owned Brigham Young University for years, had a well of empathy, but knew that, without gay participation, Bridges would have been a bridge to nowhere.

“Mormons are coming in peace,” he told them. “We don’t have all the answers.”

For some pride participants, Mormons showing up at their parade and not advocating for marriage equality “is not enough,” she said, “and I get that.”

The LDS church’s new website — mormonsandgays.org — reaffirms that “same-sex attraction is not a sin … acting on it is,” and Mormon leaders still insist that sex should be only between a husband and a wife.

Well aware of the gay community’s concerns, Munson attended a planning meeting about a week before the parade. She listened politely and finally raised her hand and said: “A bunch of Mormons are planning to march in our Sunday dress. Is that OK? Will we be intruding?”

“I went to that fear place immediately,” he says, warning Munson, “You’ll be booed and harassed.”

Even so, Williams backed the idea at the Utah Pride Center and with grand marshal Black, who embraced it and insisted on putting Bridges at the front of the parade.

In the end, the positive response proved overwhelming. Up and down the parade route, the crowd cheered, clapped and, yes, cried.

“It was,” Williams said, “one of the most beautiful moments of my life.”