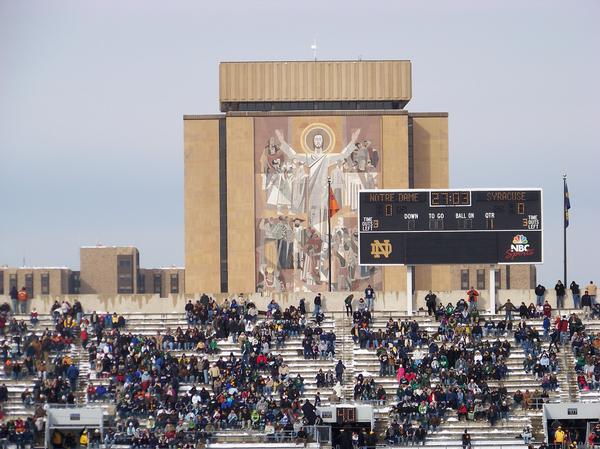 “Touchdown Jesus” overlooks the football stadium at the University of Notre Dame.

The head of the Society of St. Pius X, a conservative Catholic sect, called Jews “enemies of the church,” late last month, according to a video posted on YouTube.

Bishop Bernard Fellay, superior general of the society, also said that he’s been getting mixed messages from the Vatican about SSPX rejoining the church, which he says has been opposed by “the Jews, the Masons.”

Concerned for their future in Egypt, some Copts are reportedly considering leaving the country, which recently adopted a constitution with an Islamist bent.

The leader of Egyptian Catholics says the constitution “prepares the way for an Islamic caliphate.”

The Church of England has dropped its ban on gay clergy in civil partnerships becoming bishops — but only if they agree to remain celibate.

The former Episcopal diocese of South Carolina, which left the national church last year, is suing the denomination over parish property.

Religious groups hit hard by Hurricane Sandy are trying to get on the list for federal disaster assistance.

Jeffrey Weiss asks: Is President Obama a secret Taoist? He does have that Yin/Yang thing going on. And no, I’m not talking about race.

The Harvard Theological Review is postponing publication of Karen King’s article on the papyrus fragment in which Jesus seems to refer to his wife, citing a need for more tests.

Thousands of Orthodox Christian men lept into into icy rivers and lakes on Sunday to retrieve crucifixes cast by priests in ceremonies commemorating the Theophany, or baptism of Jesus.

The Old Grey Lady sniffs at churches that meet in bars. I liked this quote, from a saloon owner in Arizona.

“I spend all week making sinners out of our good cowboys and cowgirls, selling them drinks and a lot of food. The least I can do is try to straighten them out a little on Sundays.”

A Catholic priest in Illinois has been put on leave after he got stuck in a pair of handcuffs and had to call police for help.

An Indiana federal district court rejected the University of Notre Dame’s suit against the contraception mandate, taking the Obama administration’s pledge to amend the rule as a “binding commitment.”

Fighting Irish fans no doubt hope the football team fares better on the gridiron tonight, where they face the University of Alabama in the National Championship.

Before the game, Notre Dame’s captain will lead the team in a recitation of the Litany of the Blessed Virgin, the WSJ reports in an article about the school’s continuing Catholic character.

Fun fact for tonight’s game: Alabama is the country’s most Protestant state, according to Gallup.