Brown initially home-schooled her daughters until a friend told her about the Minnesota Virtual Academy, an online public school that is fully accredited. She liked the curriculum, and as a single mom relying on substitute teaching income, she preferred how the school provided the supplies instead of having to buy supplies herself as a home-school parent.

“You can’t give your kids an effective moral and religious upbringing if you only see them a couple of hours a day,” said Brown, a Catholic whose daughters, now in the 10th and 12th grade, started virtual school in the second and fourth grade. “When you’re at home with them, you can incorporate your beliefs into the day.”

Since Florida became the first state to try them in 1996, virtual public schools have enjoyed dramatic growth, with at least some of it coming from religious families. Like home-schooling parents, parents of virtual public school students like having their children home so they can integrate religion and values into the school day.

In the 2011-2012 school year, 275,000 students were enrolled in online K-12 programs, up from 50,000 a decade ago, according to “Keeping Pace with Online and Blended Learning: A Guide to Policy and Practice 2012,” a report from the Colorado-based Evergreen Education Group. Currently, 32 states and the District of Columbia offer virtual public schools.

A growing number of private religious schools are also seeking religious course developers to develop virtual courses for them.

“There’s a lot of interest about online learning in the faith community,” said Matthew Wicks, chief operating officer for the International Association for K-12 Online Learning.

Brown said she had considered a Catholic virtual school for her daughters, but thought the academics were not as strong as at the Minnesota Virtual Academy.

Virtual schools are different than home schooling in several ways. They are part of the public school system, employ state-certified teachers, administer state assessment tests, and follow standardized curriculums. There are also report cards and transcripts.

In a typical week, students spend about 20 to 25 hours on textbook reading and class work, and another five to 10 hours per week attending online classes with a teacher and fellow students.

The largest virtual school operator is K12 in Herndon, Va., followed by Baltimore-based Connections Education, which was recently acquired by Pearson, the British textbook publisher. The rest of the industry consists of smaller operators and some nonprofit virtual schools.

These schools generally cater to students who have had problems succeeding in traditional school environments, but also attract students who need extra flexibility to devote several hours a day to athletics, music, art or other pursuits. 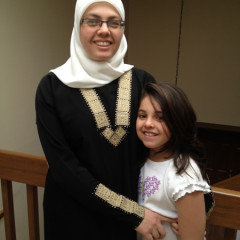 Jomana Al-Hinti of Toledo, Ohio, whose daughter Reema is a second grader in the Ohio Virtual Academy, gives her daughter daily Arabic lessons and twice-weekly Quran lessons that would be much harder to do if she attended a regular school. RNS photo courtesy Jomana Al-Hinti.

That flexibility also attracts families of faith who want their children to be able to attend daytime prayer services or be involved with other religious activities.

Jomana Al-Hinti of Toledo, Ohio, whose daughter Reema is a second grader in the Ohio Virtual Academy, gives her daughter daily Arabic lessons and twice-weekly Quran lessons that would be much harder to do if she attended a regular school.

“Education is not just math and reading, but teaching kids to grow as individuals, and teaching them about their faith,” said Al-Hinti, 39. “I can teach her Islam the way that it should be taught.”

“We liked the lifestyle that it brought to our family. We had so much more time to spend with them, and to instill our values in them,” added Jennifer Bell, a Mormon mother of four in Kuna, Idaho.

While virtual school providers develop secular curriculums, religious parents like that they can interject their own religious views into the courses. When her daughters’ history course came to the Protestant Reformation, Brown said she gave the lesson a “Catholic slant.”

On chapters involving evolution, some religion parents stress that evolution is a theory, and also raise creationism.

“Some families who are religious, with K12, they often see a chance for their children to learn wit Sadie Bell studies at a desk. Regarding virtual school, Sadie’s mom Jennifer Bell says, “We liked the lifestyle that it brought to our family. We had so much more time to spend with them, and to instill our values in them.” RNS photo courtesy Jennifer Bell. **Note: This image is not available to download.

Parents of faith also like virtual public schools because they don’t have to worry about their children hearing foul language or seeing a racy music video on a classmate’s iPod.

“That’s one of the things we appreciate — our daughters are not exposed to things we try to keep them away from,” said Debbie Slawinski, a Jehovah’s Witness from Buford, Ga., whose two girls are in kindergarten and third grade.

“You don’t know what they’ll be exposed to when they’re so little. I feel like they need a stronger foundation in their values before they’re thrown into the world. I want them to be prepared and to have a sense of themselves so they know how to make good decisions when the time comes,” said Bell.

“Every meeting we talk to parents who feel the same way we do,” Slawinski said. “They’re of a different religion, but their goals are the same.” 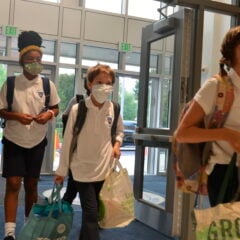