(RNS) The seven deadly sins have new partners in crime.

Lust, gluttony, greed, sloth, wrath, envy and pride still attract a lot of attention. But as the Internet and other media invade American life, our vices have also gone virtual, according to a new study. 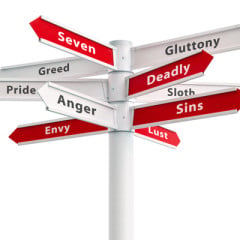 Lust, gluttony, greed, sloth, wrath, envy and pride still attract a lot of attention. But as the Internet and other media invade American life, our vices have also gone virtual, according to a new study. *Note: This image is not available to download. RNS photo courtesy Shutterstock.

Nearly half of Americans say they are tempted to idle the hours away on the Internet, video games and television, according to Barna Group, a California-based Christian research organization.

And more than one in four American men admit to struggling with Internet pornography or other sexually inappropriate material online. Millennials — Americans born between the early 1980s and 2000s — are most likely to seek forbidden fruits online, according to Barna.

Vice now “shadows many of the digital domains of contemporary life,” he said. “For faith leaders, this shift underscores the importance of including technology and media as part of a broader discussion of spirituality and stewardship.”

But religious leaders might not find eager ears among young believers. Young Americans are more likely to admit to being tempted by transgressions, according to Barna’s research.

That may mean they’re more willing to open up about their private lives, Kinnaman said. But it also suggests that young Americans see nothing wrong with breaking a commandment now and then.

“Millions of Millennials do not see temptation as something to be avoided, but rather a relatively benign feature of modern life,” Kinnaman said.

Still, as sinners go, Americans are pretty nerdy. Work-related vices top the list of temptations, according to Barna.

The most commonly admitted temptation (by Barna’s definition) is worrying or anxiety, which 66 percent admit to. That’s followed by procrastination (60 percent), eating too much (55 percent) spending too much time on media (44 percent) and being lazy (41 percent).

Part of that might be the so-called “halo effect” — Americans’ tendency to present their best selves to pollsters. But it also reflects a distinctly American approach to vice – and to virtue, said Kinnaman.

“Productivity is not exactly the most biblical pursuit,” he said. “That specific ‘temptation’ is much more reflective of American values than of core biblical themes.”

The Barna survey included 1,021 online interviews conducted among a sample of adults in all 50 states. The sampling error is plus or minus 4 percentage points, at the 95 percent confidence level.