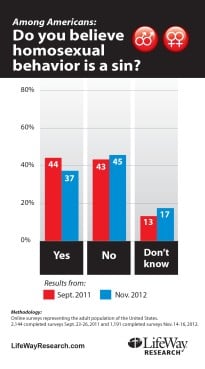 (RNS) Americans’ acceptance of gays and lesbians is continuing to grow, with a new poll showing that just over a third of Americans view homosexuality as a sin, down from 44 percent a year earlier. In the wake of historic victories for gay-rights supporters in last month’s elections, a pair of USA TODAY/Gallup Polls find growing acceptance among Americans toward gay men and lesbians _ and soaring optimism among gay Americans that issues involving homosexuality will one day no longer divide the nation. **Note: this image is not available to download. Credit: RNS photo courtesy Shutterstock.com

The finding from LifeWay Research, which was founded by the Southern Baptist Convention, was released just as the pastor who was to give the inaugural benediction for President Obama withdrew from the program over an anti-gay sermon he gave 20 years ago.

The Rev. Louie Giglio bowed out on Thursday (Jan. 10) after a liberal group discovered a sermon he preached in the 1990s in which he denounced the gay rights movement and advocated efforts to turn gays straight. In withdrawing, Giglio did not renounce the remarks but said that battling gay rights was no longer a priority for him.

“The culture is clearly shifting on homosexuality and this creates a whole new issue: How will America deal with a minority view, strongly held by evangelicals, Catholics, Mormons, Muslims, and so many others?” said Ed Stetzer, president of LifeWay Research.

Stetzer said that Obama’s own shift in embracing same-sex marriage and other gay rights in the past year may have played a role in the change in public opinion.

“The president’s evolution on homosexuality probably impacted the evolution of cultural values — there is a real and substantive shift, surprisingly large for a one-year time frame — though this was hardly a normal year on this issue,” Stetzer said.

Gay rights groups criticized Obama for inviting evangelical megachurch Pastor Rick Warren, an outspoken opponent of gay marriage, to deliver a benediction at his first inauguration, in 2009. But neither Warren nor the White House backed down.

LifeWay’s survey in November found 37 percent said they believe homosexual behavior is a sin, down from 44 percent in September 2011.

The percentage of Americans who do not believe homosexuality is a sin remained nearly the same, at 43 percent in September 2011 and 45 percent in November 2012. There was an increase in the percentage of those who said they were unsure of what they believe.

The survey of nearly 1,200 adults has a margin of error of plus or minus 2.9 percent.