HYATTSVILLE, Md. (RNS) For Sean Carlson, the little stories have added up the most.

The moment that his mother, Barbara, said she had made “save the date” cards for Sean’s upcoming wedding to another man, Jamie McGonnigal. The funny story of how his mother and Jamie first met over a flat tire. The subtle, then matter-of-fact way that Barbara Carlson, a devout Catholic, let her son know she had moved past years of doubts and disagreements and was voting for the gay-marriage measure in Maryland last November. 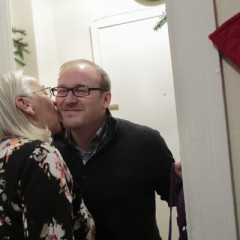 Barbara Carlson (left) kisses her son Sean as he goes out to walk the dog in Washington, DC, Tuesday, December 11, 2012. For Sean Carlson and his mother Barbara, the road to reconciliation has been rough and remains unfinished. RNS photo by Toby Jorrin/USA Today.

Barbara, 60, had put literature on that referendum in a place in her home so that Sean, 28, was sure to see it. It was her invitation for another talk in a progression of often stormy conversations over nearly seven years. Many had ended badly, including one in which Sean stormed out of his mother’s house and vowed never to return.

So a conversation about that vote in Maryland, one of three gay-marriage measures that passed last fall, was not something he was looking forward to.

“I was afraid of what the yes-or-no answer would be, and recognizing that if it was a no, I was in for a three- or four-hour” argument, said Sean, who could not vote on the measure because he lives in the District of Columbia.

The eventual conversation was perfunctory. Of course she would vote yes, Barbara said. After all, her son was engaged to be married. Later, he would choke up telling the story about the “cathartic moment” to friends and work colleagues at the Family Equality Council, a non-profit that supports gay, lesbian, bisexual and transgender parents and their children.

Had the son underestimated the woman who had raised him as a single mother?

“I think he always underestimates me,” Barbara replied.

The fight over same-sex marriage has been going on for decades, and voters in state after state turned it down. But in 2012, voters in Maryland, Maine and Washington became the first to approve it at the ballot box. After the passage of those three initiatives, same-sex couples can now marry in nine states and the District of Columbia. Combined, these states and the district comprise 15.8% of the U.S. population.

Millions of dollars have been spent on ads defending traditional marriage or arguing for same-sex unions, but beneath the debate, a gradual shift in public opinion has been taking place. In a December USA Today/Gallup Poll, the 53 percent who agreed that same-sex couples should have the same marriage rights as heterosexual couples was nearly twice the percentage who said so in 1996.

Equally noticeable, 36 percent said they had changed their minds about the issue in the course of their lives, with 35 percent of them saying they were more tolerant, 18 percent more aware, and the rest scattered across varying responses, including the 8 percent who said they had decided against gay marriage.

That 36 percent figure represents millions of stories like the Carlsons’, of families torn and sometimes brought back together. Of clashing expectations and tenuous resolutions. Of lifetime estrangement. Underneath the din of the public debate, these private conversations are where the changes are taking place.

“I’ve been to seven weddings for gay couples this year and met guests at each who had never been to one before,” said Ken Mehlmann, former chairman of the Republican National Committee, who came out in 2010 and is now working on Project Right Side, an initiative to build conservative support for same-sex marriage. “And what they and I see at the wedding are love, commitment, a willingness to put someone else before yourself. In short, family values.”

When Sean Carlson told his mother he was gay during the 2005 Christmas break while home from his studies at Duquesne University, “it took me awhile to process it,” she recalled. “At the time, I probably reacted the way many parents would. I looked at him and said, ‘Above all, you are my son, and I love you as my son.'”

“I don’t want to contradict you, but maybe we see things differently on that,” he tells his mother. “I can remember some knock-down, drag-out fights about the fact that I didn’t feel that you did actually accept me that way. I think there is a big difference between understanding what the words are, and how that actually equates to my living experience.”

Later, he says, “the kind of support I would expect to get, I don’t think was always there.”

Barbara had grown up a strong Catholic and raised her son that way. The church’s position on homosexuality is clear. The clergy abuse scandal had already made her question her faith, she said, and so when her son came out, the questions it raised and the conflict that ensued sent her adrift from the church for a short time.

She eventually came back, she said, through a “faith renewal.” What brought her back? “My belief in God,” she said.

Sean still believes in God but no longer considers himself a Catholic. The church of his childhood, he said, does not treat him as a “whole person.”

Because of that and other issues, the mother-son relationship was strained.

It was “not necessarily disbelief,” when her son told her she was gay, Barbara said, but she says she looked upon homosexuality the same way many in her generation had. “It had always been ‘don’t ask, don’t tell,'” she says. “‘Don’t ask, don’t tell’ is not just a military thing.”

That was not good enough for Sean. “Once I had turned that corner” in coming out as gay, he said, “I refused to abide by that, not even at home. There is no ‘don’t ask, don’t tell’ policy in our house, and I think that caused some strife over the years.”

His mother, he still believes, was not as supportive as she would have been had he had been heterosexual. Yet they stayed tethered, sometimes more closely than others, through the storms that ensued.

“I think, in hindsight, I could have expressed more empathy for the process and how difficult it is for people to change their minds,” Sean said. “I know that, but it is different when it is your mom, and not a total stranger.”

Over the years, moments became milestones. Sean and Jamie both took delight last Christmas when they learned Barbara sent a homemade card to Jamie’s mom in suburban Boston.

“That (card) was another surprise,” Jamie says, in a moment when Barbara has stepped away. “I don think she even realizes she is doing these things that make it better.”

Jamie, 36, has acknowledged being gay since age 19. His mother supported him from the beginning. He thinks his upbringing in the Unitarian Church, and its early embrace of gay ministers, helped smooth his path. Jamie came out later to his father, and he says they are less close.

Jamie ticks off the three stages of relationships that gay, lesbian, bisexual and transgender people often get after they come out: Tolerance, acceptance, embrace.

Sean and Barbara independently say that she is somewhere between acceptance and embrace. But Sean expects an embrace soon, and he says he and Jamie agree that Barbara’s willingness to talk openly about her journey was another “huge milestone” for all of them.

They arrived at this moment mutually.

“Time, space and some soul-searching,” Barbara said. “I think we both needed to focus on seeing the other’s perspective.”

News
LGBTQ Catholics stung by Vatican rebuff of same-sex unions
Follow us on Facebook!
Submit your photos to RNS