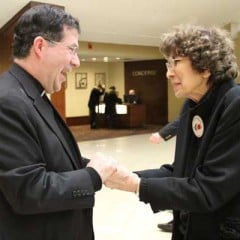 WASHINGTON (RNS) Each January in the four decades since the Roe v. Wade decision legalized abortion in 1973, Nellie Gray marshaled tens of thousands of anti-abortion demonstrators for the March for Life rally.

Now, after Gray’s death in August at age 88, a woman less than half her age takes up the cause to lead marchers from the National Mall to the Supreme Court on Friday (Jan. 25) to protest the 40th anniversary of Roe v. Wade.

“On one hand, it’s a very somber time for me every year,” said Jeanne Monahan, the new president of the March for Life Education and Defense Fund. “I’m always a little saddened. And on the other hand, there is a youthful sort of energy and enthusiasm that’s there.”

It’s the youth – who she estimates account for 85 percent of the march participants – that especially give Monahan hope as she follows in Gray’s footsteps. Although Roe remains the law of the land, she expects marchers to continue their annual pilgrimage to Washington “until we work ourselves out of a job.” 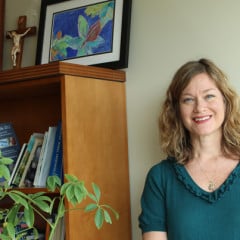 Jeanne Monahan, new president of March for Life, is spearheading efforts for the annual March for Life, the large anti-abortion protest on the National Mall that will mark the 40th anniversary of the Supreme Court’s Roe v. Wade decision legalizing abortion. RNS photo by Adelle M. Banks.

“We’re winning with young people and we’re winning with the American public,” she said, citing Gallup polling, which shows a record-low 41 percent of Americans calling themselves “pro-choice.” “We’re also winning one state at a time. More pro-life legislation has passed in the states than ever in the history of our country.”

Monahan comes to the job after working for the Catholic Church, the U.S. Department of Health and Human Services and, most recently, the conservative Family Research Council. As director of FRC’s Center for Human Dignity, she fought the Obama administration’s contraception mandate and urged the defunding of Planned Parenthood.

“Nellie Gray was the living embodiment of never-say-die and Jeanne is the embodiment of something else,” said Alvare, who is in her 50s and was the Catholic bishops’ chief spokeswoman on abortion in the 1990s. “It’s a woman of the second half of the 20th century who has grown up swimming in Planned Parenthood philosophy soup who has thought about it and has rejected it and has decided to take leadership in telling other people that it’s a lie.” 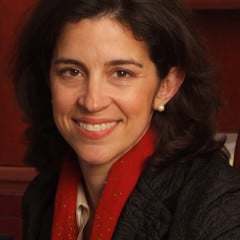 At age 40 and single, Monahan points to younger leaders, such as Live Action’s Lila Rose, who are galvanizing the movement using tactics such as undercover videos and whose work Monahan cited in her FRC booklet on “What Everyone Should Know About Planned Parenthood.”

The Rev. Harry Knox, 51, the new executive director of the Religious Coalition for Reproductive Choice, acknowledged that young people have been raised in a context where they have heard more from abortion opponents than abortion rights supporters. But he said “we certainly have tit for every tat.” RCRC’s youth program is expanding to fight state legislation that would reduce access to abortion. Lisa Rose is the founder of Live Action and is known for her investigatory videos of Planned Parenthood. Religion News Service photo courtesy of liveaction.org.

Monahan’s enthusiasm is fueled not only by the youth that are expected to descend upon the National Mall but by two Catholic role models: Gray and Pope John Paul II.

Gray worked on the movement until her dying day, and Monahan has prayed to her to ask her to intercede on her behalf.

“We know that friends can pray for us here on earth and friends in heaven can pray for us, too,” she said. “I ask for Nellie’s prayers quite a bit with this.”

Monahan, who came on board full-time in November, works from a temporary office at the Blessed John Paul II Shrine in Washington. She earned a master’s degree in theology at the Pontifical John Paul II Institute for Studies on Marriage and Family. Monahan embraces the “culture of life” phrase popularized by John Paul, calling herself a “huge fan.” 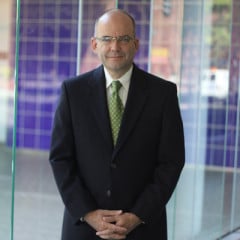 The Rev. Harry Knox, 51, the new executive director of the Religious Coalition for Reproductive Choice, acknowledged that young people have been raised in a context where they have heard more from abortion opponents than abortion rights supporters. RNS photo courtesy Human Rights Campaign Foundation.

Monahan’s colleagues credit her faith as a motivation for her anti-abortion work.

“She’s always the first person to say, ‘Let’s not just jump the gun. Let’s really pray about this and make sure this is the direction that God wants us to go,’’ said Mary McClusky, 36, a special projects coordinator with the U.S. Catholic bishops’ Secretariat of Pro-life Activities.

But Monahan said faith is not the sole driver for her or other activists.

“I think that, regardless of my faith, being pro-life is a reasonable position,” she said. “That said, I think my faith profoundly strengthens me for the battles that you get hit with when you take this stance.”

Unlike Gray’s practice of shunning the press before the march, Monahan is conducting media interviews and has revamped the organization’s website and social media outreach. The day after the rally, there will be the first “March for Life 5K Run.” Far fewer lawmakers will take turns at the rally’s central stage, joining speakers including a male activist she called the “fruit of rape.”

Rape and abortion made an unexpected appearance in two key Senate races last year, and when Monahan blogged that “abortion after a rape robs an innocent victim of a very beautiful life,” People for the American Way’s Right Wing Watch criticized her for upholding “narrow religious views” more than helping women. 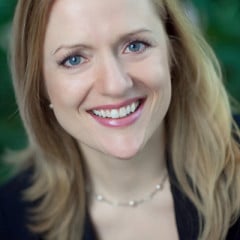 But Monahan stands by her view.

“I don’t think abortion after rape actually makes it better,” she said. “I think it makes it harder on a woman. But let me be clear that I think abortion is never good for women.”