(RNS) President Obama will publicly take the oath of office with Bibles once owned by his political heroes, Abraham Lincoln and the Rev. Martin Luther King Jr. 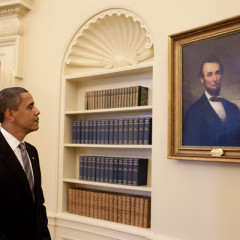 President Barack Obama looks at the portrait of Abraham Lincoln that hangs in the Oval Office. RNS photo by Pete Souza/The White House.

When Obama lifts his hand from the Bibles and delivers the inaugural address on Monday, his own approach to Scripture will come into view. Characteristically, it sits somewhere between the former president and famous preacher.

His faith forged in the black church, Obama draws deeply on its blending of biblical narratives with contemporary issues such as racism and poverty. But like Lincoln, Obama also acknowledges that Americans sometimes invoke the Bible to argue past each other, and that Scripture itself counsels against sanctimony.

Obama articulated this view most clearly in a 2006 speech, saying that secularists shouldn’t bar believers from the public square, but neither should people of faith expect America to be one vast amen corner.

“He understands that you can appeal to people on religious grounds,” said Jeffrey Siker, a theology professor at Loyola Marymount University in California who has studied Obama’s speeches. ”But you also have to be able to translate your case into arguments that people of different faiths, or no faith, can grasp.”

One “great source of encouragement in my life,” Obama has said, is Isaiah 40:31: “Those who hope in the Lord will renew their strength. They will soar on wings like eagles; they will run and not grow weary, they will walk and not be faint.” 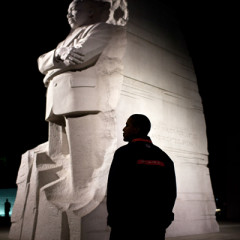 Obama seldom attends church since moving into the White House but occasionally alludes to his private faith in public speeches. More often, he cites Scripture to connect with traditions and arguments familiar to most Americans, if only faintly.

“He is a leader who wants to approach challenges from many different aspects of our lives,” Hunter said. “Not just intellectual, but also moral, and he finds Scripture to be a way of communicating values that many of us share.”

Like many liberal Protestants, Obama often emphasizes Bible passages that urge compassion for the poor and downtrodden.

“He uses those Scriptures more than any other type,” said Hunter. “It has to do with assisting those in need, rather than moral commands about sin,” Hunter said.

As Hunter notes, occupying the bully pulpit gives presidents license to cite Scripture, and Obama is far from the first to use it.

Bill Clinton alluded to the Psalms while asking for forgiveness during the Monica Lewinsky scandal, and George W. Bush cited Scripture to forge a personal connection with evangelical Christians.

He has quoted the Sermon on the Mount to explain his economic views, read Psalms to bereaved families in Newtown, Conn., and Tucson, Ariz., and cited the Bible’s Golden Rule to explain his evolving support for same-sex marriage.

During his 2009 inaugural address, Obama cited the Apostle Paul’s admonition to “set aside childish things,” challenging the country to tackle its complex problems.

“Any time anybody quotes Scripture, they are implicitly saying: If you are a person of faith, this is what God is telling us to do,” said Siker. But like Lincoln, Obama has also used the Bible for the opposite purpose — to argue that no one fully knows the divine design.

“The full breadth of human knowledge is like a grain of sand in God’s hands,” Obama said at the National Prayer Breakfast in 2011.

“And there are some mysteries in this world we cannot fully comprehend. As it’s written in Job, ‘God’s voice thunders in marvelous ways. He does great things beyond our understandings.’”

Of course, not everyone agrees with Obama’s interpretation of  Scripture.

Focus on the Family founder James Dobson has accused Obama of “dragging biblical understanding through the gutter.” Former GOP presidential candidate Rick Santorum said Obama has a “phony theology … not a theology based on the Bible.”

But nothing upset conservatives quite like Obama’s citation of the Bible to back same-sex marriage. Even Hunter criticized the president. “You can’t cite one Scripture to interpret or negate other Scriptures,” he said. “But I know for him that was a moral decision.”

That’s precisely why Obama drew on the Bible, said Mary Frances Berry, co-author of “Power in Words: The Stories Behind Barack Obama’s Speeches, from the State House to the White House.”

In that vein, Obama sometimes bookends big speeches with Scripture, Berry said, wedging a challenging message in between. 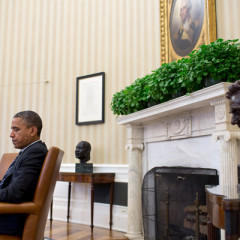 Despite Obama’s later estrangement from the Rev. Jeremiah Wright, his former pastor at Trinity United Church of Christ in Chicago, he learned at the feet of a rhetorical master, said Martha Simmons, co-editor of “Preaching with Sacred Fire,” an anthology of African-American sermons.

Among the skills Obama gleaned at Trinity UCC is the ability to draw modern messages from ancient texts, and to condense that message into a memorable phrase. It’s called “shorthanding” Scripture, Simmons said.

For example, Obama frequently used the expression “we are our brother’s keeper” during his 2008 presidential campaign. Some evangelicals were perplexed at the citation, noting that it comes from the mouth of Cain, history’s most famous fratricide.

But the message, which Obama used to argue against excessive individualism, made perfect sense to African-Americans, said Simmons. ”He was doing what the black community does: understanding the relevancy of the text for our modern context.”

One more rhetorical tact Obama learned from the black church, especially from King: Orators can challenge their audience, but should always end on an uplifting note.

“When all is said and done,” Simmons said, “you leave people with a hopeful word.”