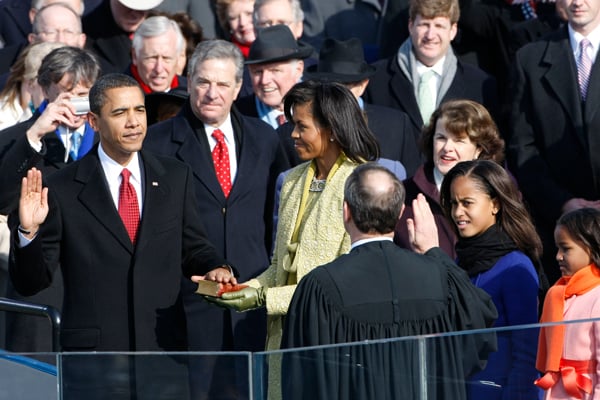 (RNS) On Inauguration Day, President Barack Obama will use two copies of the Bible when he begins his second term: one belonged to Abraham Lincoln and the other to the Rev. Martin Luther King Jr. Because we live in a highly polarized society where everything and everyone is grist for the Internet mill, there are questions whether the Bible or any other sacred text should be used when political leaders are sworn into office.

Beginning with George Washington in 1789, many presidents and vice presidents have used various copies, versions, translations and editions of Scripture when they assumed their public duties. But it was not always so.

At his inauguration in 1825, John Quincy Adams used a law book instead of Holy Writ, and it was not until Ulysses S. Grant’s second inauguration in 1873 that the custom of presidents laying their hands on a Bible became a fixed part of American tradition.

Recently, Lawrence O’Donnell, an MSNBC commentator, argued that the Bible, and by implication all other religious writings, have no place in official ceremonies in a nation that legally affirms the separation of religion and state.

O’Donnell’s comments were met with both support and opposition from the omnipresent electronic chatterers. Feelings ran high because for some people talk of change is threatening.  But as more and more American political leaders represent diverse or no religious identities, the issue O’Donnell raised is not going to abate.

It is not the Bible, but rather the oath written into the Constitution that is necessary and sufficient for our leaders. Linking that pledge to any religious text does not add to the efficacy of the political vow. Interestingly, the Constitution provides for “affirming” one’s oath of office instead of “swearing,” something both Franklin Pierce and Herbert Hoover, a Quaker, did when they became president.

When U.S. Rep. Keith Ellison, D-Minn., a Muslim, took his oath of office while holding Thomas Jefferson’s Quran, he was criticized for not using a Bible. Rep. Debbie Wasserman Schultz used a copy of the Tanach or Hebrew Bible, and Linda Lingle did the same when she became Hawaii's governor. Newly elected Tulsi Gabbard, D-Hawaii, the first Hindu member of Congress, chose the Bhagavad Gita. Fellow Hawaii Democrat Sen. Mazie Hirono is a Buddhist who was born in Japan.

If Mitt Romney had been elected president, it is possible he would have sworn his oath while holding the Book of Mormon. Because one out of five Americans today profess no religion, perhaps a political leader, a “none,” will want to use one of Thomas Paine’s humanist writings, such as “Common Sense” or “The Age of Reason,” at a swearing-in ceremony.

The United States continues to be a dynamic work in progress. We began as a nation dominated and controlled by white males who were overwhelmingly Christian and property owners. A large part of the country engaged in human slavery until 1863. No woman could cast a ballot until 1920, and full voting rights for African-Americans were not achieved until the civil rights struggles of the 1960s.

Jews, Catholics, Quakers, Mormons, and other minority religious groups have all faced prejudice and discrimination.

In one case, Jacob Henry, a Jew, was elected to North Carolina's legislature in 1808, but opponents tried to prevent him from serving a second term because a law demanded that legislators affirm the divinity of the New Testament. Henry’s eloquent response is still relevant today:  “Will you drive from your shores and from the shelter of your Constitution all who do not lay their oblations on the same altar, observe the same ritual, and subscribe to the same dogmas? If so, which among the various sects into which we are divided shall be the favored one?”

Public officials need to recognize the changing demographics and execute their public duties without excluding or alienating any group of Americans. Elected leaders should simply affirm or swear the thirty-seven words of Article Two, Section, One, Clause Eight that include: “to preserve, protect and defend the Constitution.”

If public officials feel the need to seek divine guidance, here is a modest proposal: They can always visit a house of worship, read from a sacred text of their choosing, and pray for wisdom, patience, and understanding.