(RNS) The Rev. Adam Hamilton, a United Methodist pastor known for his skilled preaching and centrist views, will deliver the sermon at the inaugural National Prayer Service next Tuesday at Washington National Cathedral. 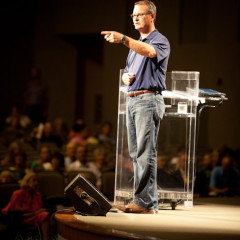 The Rev. Adam Hamilton addresses his United Methodist Church of the Resurrection in Leawood, Kan. Hamilton will preach Tuesday at the National Prayer Service. RNS photo by Sally Morrow

Hamilton is founding pastor of The United Methodist Church of the Resurrection in Leawood, Kansas, which began in a funeral home but has grown to 16,000 members, the largest church in the denomination.

The National Prayer Service, which dates to George Washington, will be attended by President Obama and Vice President Joe Biden, and is expected to include prayers, readings, blessings and hymns recited by religious leaders.

“I’m honored to have been asked to deliver the message for this service of worship,” Hamilton wrote on his blog. “And, to be honest, I’m a bit nervous as well. I’m used to preaching before thousands of people each weekend, but I’ve never had the President of the United States and our nation’s top leaders sitting on the front rows.”

Raised around Kansas City, Hamilton was baptized Catholic, converted to Pentecostalism as a teenager and attended Oral Roberts University, according to The United Methodist Reporter.

He later tired of Pentecostalism’s “black-and-white, very conservative theology,” and joined the United Methodist Church after reading its Book of Discipline – perhaps the most unlikely conversion story since Saint Paul.

A prolific author, Hamilton’s 13 books, including “Seeing Gray in a World of Black and White,” have sold nearly a million copies. That title hints at Hamilton’s approach to controversial topics, including homosexuality, an issue that has divided his denomination and shaken up Obama’s  inaugural program.

Last week, the Rev. Louie Giglio withdrew from delivering the benediction at Obama’s inauguration after a sermon surfaced from the 1990s in which the evangelical pastor denounced the gay rights movement. The Rev. Louis Leon, rector of St. John’s Episcopal Church on Lafayette Square near the White House, will take Giglio’s place.

As for Hamilton, he has criticized Christians who castigate gays and lesbians. But he also found fault with gay and lesbian activists for boycotting Willow Creek Church near Chicago.

Some Christians see the biblical teaching on homosexuality as reflecting the culture and times in which the Bible was written and not reflecting God’s eternal perspective on homosexual people. Others believe these scriptures represent God’s timeless will for how human beings practice intimacy. Some of the latter are militant in their anti-homosexual position. But most thoughtful evangelical pastors struggle with the tension between their desire to welcome and and love all people and their desire to be faithful to the scriptures regarding sexuality as they understand them. Willow Creek is among the latter and their pastor, Bill Hybels, from my perspective, is someone who has sought to welcome and love gay and lesbian people while holding to traditional understandings of these biblical texts.

Last year, Hamilton co-sponsored a proposal at a United Methodist assembly to soften church doctrine that calls homosexuality “incompatible with Christian teaching.” The resolution, which stated that church members disagree on homosexuality, failed.

In a sermon last September, Hamilton said he has wrestled throughout his Christian life with the question of how to interpret biblical writings on homosexuality: Are they time-bound prohibitions, or God’s eternal word?

“You can be a faithful follower of Jesus Christ and somebody who loves all people and is serious about your faith and a mature Christian, and you can make an argument on either side of that line,” Hamilton preached. “I have made a case on both sides of that line before.”

“I was raised in a church that says: The Bible says it, I believe it, and that settles it. And that really works well as long as you don’t read very much of the Bible,” Hamilton continued. “But I would probably still find myself on the conservative side of this issue were it not for all the people that I have met.”

Hamilton then spoke of seeing “the light of Christ” in the lives of gay and lesbian members of his congregation and the difficulty he would have telling his daughter, if she were a lesbian, that Scripture condemns her to “a life alone” without romantic love.

Hamilton was named one of “10 people to watch in America’s spiritual landscape” by Religion & Ethics NewsWeekly in 2000. The United Methodist Reporter said Hamilton “may reach more United Methodists than anyone else in the denomination” though his books, sermons, speeches, videos and blog posts.

“The tradition of the National Prayer Service honors the values and diversity that make America strong,” said Steve Kerrigan, CEO of the Presidential Inaugural Committee, “and we are privileged to have Reverend Hamilton’s voice joining this celebration of the role of people of faith during the 57th Inauguration.”

Washington National Cathedral has hosted inaugural prayer services since Franklin Delano Roosevelt’s first inauguration in 1933, according to the inauguration committee. Earlier this month the Episcopal cathedral announced that it would begin hosting weddings for same-sex couples.

In 2009, the Rev. Sharon Watkins of the Christian Church (Disciples of Christ) was the first woman to preach at the National Prayer Service.