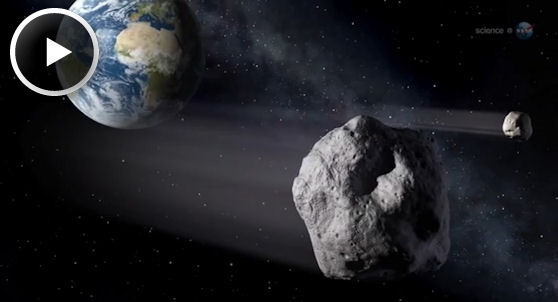 The Mayans are so 2012. Time to crank up the Apocalypse Anxiety Meter for 2013, since an asteroid about half the size of a football field will fly extremely close (relatively speaking) to Earth – and on Feb. 15th! Enjoy that last Valentine’s Day…

"This is a record-setting close approach," says Don Yeomans of NASA's Near Earth Object Program. (Yes, there is such a thing.) "Since regular sky surveys began in the 1990s, we've never seen an object this big get so close to Earth."

Of course NASA adds that there's no danger of a collision, but these are the guys who faked the Moon landing, so take it for what it’s worth. Either way, they have a cool video simulation.

President Obama pushes immigration reform, but doesn’t mention provisions for reuniting gay and lesbian couples – a potential dealbreaker for the Catholic bishops and some other religious backers of reform.

The Boy Scouts of America are getting an earful from both sides on their proposal to eliminate the ban on gay scouts and scout leaders and go with the local option. The ban on atheist scouts ain’t going anywhere, of course, though you may not hear much about that – though RNS has the story.

Had enough about gays and lesbians? So have David Blankenhorn and an interesting new consortium of religious believers from across the spectrum who want to start a “new conversation on marriage” – one that will look at the problems straight folks have with matrimony, too.

“I’m all for pragmatic alliances, and dislike the partisan’s habit of rejecting anything not up to his standards, but this is an alliance I think more idealistic than pragmatic. Even while saying bravo.”

Some Orthodox rabbis in New York are vowing to resist an effort to regulate a risky oral blood suctioning technique in their circumcisions.

Some Catholic bishops are vowing to go to jail over the government’s contraception insurance mandate, even though jail isn’t really an option.

Some place, there’s a link between those stories.

John Hagee and the “Christian lobby” are gearing up to oppose Chuck Hagel’s nomination for defense secretary.

Not so much pushback on Arkansas’ effort to allow guns in churches, where of course they belong.

The Japanese Jesus? Our newest blogger, Mike O’Loughlin, unpacks the myth about Jesus living out his days in the Far East.

BREAKING: The Los Angeles Times discovers that Mormon-owned Marriott International is joining the Human Rights Campaign’s coalition of companies calling for the repeal of the federal Defense of Marriage Act. Peggy Fletcher Stack, who knows from Mormons, wonders why the news flash.

A quarter of Americans – and nearly four-in-10 evangelicals – say God will help determine the outcome of the Super Bowl. (I thought the Almighty didn’t work on Sundays?)

One thing’s for sure: Jewish Ravens are psyched. No, that’s not a new branch of the Hasidim. As The Forward explains, they wear purple pants, jerseys, socks, face paint and special Ravens tzitzit to watch the game together. You read that right.

Want to know how much sports fandom is like religion? Michael Serazio explains, in this Atlantic essay…

And since religion is also sometimes about sacred traditions, I think I’m justified in including this news item: Twinkies may be back in business.

Carry it on, as the Great Man would say, and put your email in the subscriber box below if you haven’t already. Peace.