(RNS) Amy Lester has followed Jesus for decades, but her keen appreciation for his sacrifice on the cross came only recently when she started eating like the prophet Daniel. 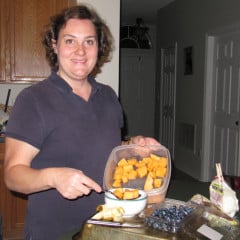 Amy Lester of Orlando prepares “nutty fruity cereal,” a staple of the Daniel Fast regimen that she keeps during Lent. Lester has followed Jesus for decades, but her keen appreciation for his sacrifice on the cross came only recently when she started eating like the prophet Daniel. RNS photo courtesy Amy Lester.

During Lent, which starts Wednesday (Feb. 13), the 40-year-old mother of two keeps a type of Daniel Fast, which involves eating only food from seeds (vegetables, fruits, unleavened grains), drinking only water and practicing daily devotions.

A similar regimen kept Daniel and his friends free from corruption in King Nebuchadnezzar’s Babylonian court, according to the Bible. Now the Old Testament example guides growing numbers of Christians in the 40-day period of preparation for Easter.

“We set apart a sacrifice in Lent in order to identify, even the smallest (bit), with what Jesus sacrificed for us,” said Lester, who attends University Carillon United Methodist Church in Oviedo, Fla. “He died for me. The least I can do is to sacrifice the foods that are comforting to me.”

Devotees say the Daniel Fast brings them closer to God by enhancing self-control, purging bad habits and improving health. It bears echoes of ancient tradition. Forgoing meat, dairy and sweeteners for a season makes the Daniel Fast resemble Orthodox Lent, which restricts consumption of meat, dairy, and oils in the run-up to Easter.

Observers see benefits to linking Lenten spirituality with healthy eating in a nation that can afford to shed a few pounds. But some also worry about food becoming a distraction or an obsession in a season of repentance and renewal. 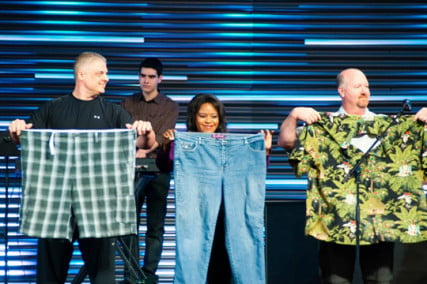 “The problem with the Daniel Fast is that the focus is on food,” said Dennis Dickerson, a Vanderbilt University professor and former historian for the African Methodist Episcopal Church. “Is there something else that you should deny yourself? In some ways, food is too easy because there may be something else that has a hold on you and is just as injurious as overeating.”

Though churches in the South started doing the Daniel Fast more than a decade ago, the trend gained international momentum more recently with help from Saddleback Church Pastor Rick Warren. His similarly named Daniel Plan for weight loss is less rigorous than the Daniel Fast since it allows for meat, but it nonetheless helped grow awareness that Daniel might have been onto something.

It also helped the Purpose-Driven pastor lose more than 60 pounds.

“I don’t think leaders have confidence that their members would take part if the pastor said, ‘I’d like us to do a (water-only) fast,’” said Kristen Feola, a former personal trainer and author of “The Ultimate Guide to the Daniel Fast.”

“But a Daniel Fast is a little less scary for people. More people are open to trying it because it’s such a unifying thing for a church.”

Prospective fasters have sought guidance in books, including Susan Gregory’s “The Daniel Fast,” which has sold more than 100,000 copies. Gregory says the two most common times to do the fast, which is normally 21 days but can be longer, are at the start of the New Year and during Lent.

“Too many do it at the beginning of the year because it’s easier as everyone wants to diet,” said 53-year-old Carolyn Scott, who lives near Naples, Fla., in an email. She plans to do it for Lent because that timing “makes the most sense.” In her view, it’s a discipline akin to Jesus’ fasting in the desert for 40 days.

For Scott, the hardest part will be going without bread, she said. She’s used to packing sandwiches for her teenage children’s lunches and will need to modify their diets as the family does the Daniel Fast together.

Lester, the Orlando mother, has a different strategy. She’ll do the Daniel Fast alone by day, then sometimes join her family in whatever they’re having at night (except dessert).

“It’s less traumatic that way for my family,” Lester said, noting they get uneasy when everyone isn’t eating the same food. “And (the fasting) is still a meaningful event.”

In some cases, entire churches do the Daniel Fast together during Lent. The idea strikes a chord in Methodist traditions, which trace their heritage to John Wesley, a proponent of fasting. Leaders in the African Methodist Episcopal Church have urged churchgoers to do the Daniel Fast together, and congregations from Washington to Pennsylvania and Maryland have joined in.

For the fourth consecutive year, St. Mark’s United Methodist Church in Charlotte, N.C., will observe Lent this year with a churchwide Daniel Fast. Young adults in the congregation tend to keep the fast more rigorously than older ones, according to Pastor Paul Milton. But the fact that most are making an effort simultaneously might help inspire those struggling with conditions such as diabetes and obesity,  Milton said.

“The ones we really need to help won’t participate,” he admits, “but we still try anyway.”