(RNS) A Lutheran pastor in Newtown, Conn., has apologized after being reprimanded for participating in an interfaith vigil following the shooting massacre at Sandy Hook Elementary School.

The Rev. Rob Morris, pastor of Christ the King Lutheran Church, prayed at the vigil the Sunday following the Dec. 14 shootings alongside other Christian, Muslim, Jewish and Baha’i clergy.

Morris’ church is a member of the Lutheran Church–Missouri Synod, and the denomination’s constitution prohibits ministers from participating in services with members of different faiths. 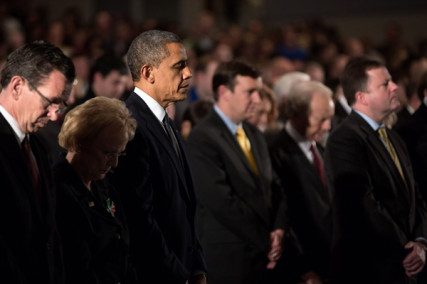 It’s not the first time a Missouri Synod pastor has been reprimanded for joining an interfaith prayer service; a New York pastor also was suspended for participating in an interfaith service after the 9/11 terrorist attacks.

LCMS president Matthew Harrison wrote in a letter to the Synod that “the presence of prayers and religious readings” made the Newtown vigil joint worship, and therefore off-limits to Missouri Synod ministers. Harrison said Morris’ participation also offended members of the denomination.

“After consultation with my supervisors and others, I made my own decision,” Morris wrote in his apology letter. “I believed my participation to be, not an act of joint worship, but an act of community chaplaincy.”

The Newtown Interfaith Clergy Association hosted the Dec. 16 vigil, which was attended by Connecticut Gov. Dannel Malloy and President Obama.

In his opening statements at the vigil, the Rev. Matt Crebbin of the Newtown Congregational Church made clear that the participating religious leaders were not endorsing one another.

“We are not here to ignore our differences or to diminish the core beliefs which define our many different faith traditions,” Crebbin said, according to a CNN transcript of the event.

He was reinstated in 2003 by Kieshnick and returned to his post as president of the denomination’s Atlantic District.

Harrison wrote in his letter that despite his reprimand of Morris, the Missouri Synod does not unanimously agree on what joint worship is. The denomination is still attempting to define it.

“I am looking forward to working together with (Morris) and others in the Synod to strive for greater unity and consensus among us,” Harrison wrote.