“On behalf of Americans everywhere, Michelle and I wish to extend our appreciation and prayers to His Holiness Pope Benedict XVI. Michelle and I warmly remember our meeting with the Holy Father in 2009, and I have appreciated our work together over these last four years.   The Church plays a critical role in the United States and the world, and I wish the best to those who will soon gather to choose His Holiness Pope Benedict XVI’s successor.” 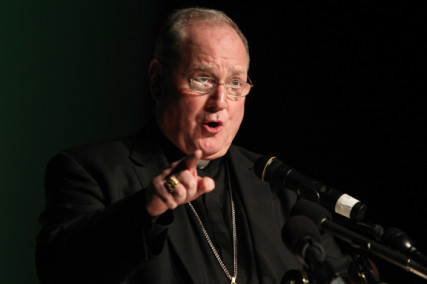 Cardinal Timothy Dolan of New York, president of the U.S. Conference of Catholic Bishops, has said talks with the White House over a proposed contraception mandate are “going nowhere.” RNS photo by Gregory A. Shemitz.

“The Holy Father brought the tender heart of a pastor, the incisive mind of a scholar and the confidence of a soul united with His God in all he did. His resignation is but another sign of his great care for the Church. We are sad that he will be resigning but grateful for his eight years of selfless leadership as successor of St. Peter.”

“We who belong to other Christian families gladly acknowledge the importance of this witness and join with our Roman Catholic brothers and sisters in thanking God for the inspiration and challenge of Pope Benedict’s ministry.”

The United States is grateful to His Holiness Pope Benedict XVI for his leadership of and ministry to the world’s 1.2 billion Catholics. He has been a man of action and principle, working to promote human rights and dignity in places around the globe where they are too often denied, and a voice of clarity and conviction about our obligations as stewards of a fragile planet. As I heard Pope Benedict say during the Mass he celebrated in Washington nearly five years ago, Americans remain a people of hope and America a land of freedom and opportunity.

“The era of cover-up and secrecy in the Catholic Church must end. Our greatest hope is that the newest Pope agrees and becomes a true leader in the spirit and teaching of the Gospels.Victims of child sexual abuse agree on one thing: they want to ensure that what happened to them never happens to another child. The only way for that to happen is for the Cardinals to select a pontiff who puts child safety and victim healing first, as the teachings of Jesus Christ dictate.” 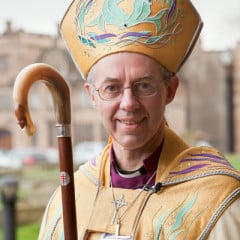 — Barbara Blain, president of the Survivors Network of those Abused by Priests

“Joseph Ratzinger leaves the papacy having failed to achieve what should have been his job one: to rectify the incalculable harm done to the hundreds of thousands of children sexually abused by Catholic priests. He leaves hundreds of culpable bishops in power and a culture of secrecy intact.”

“The Holy Father’s resignation is a selfless and noble act done for the good of the church that he has loved and served for decades.”

“Pope Benedict XVI reconfirmed the official Catholic position that God’s covenant with the Jewish people at Sinai endures and is irrevocable.  He said that the Catholic Church should not try and convert Jews.  There were bumps in the road during this papacy … but he listened to our concerns and tried to address them, which shows how close our two communities have become in the last half century, and how much more work we need to do together to help repair a broken world.”

“I think it’s a sign of the great humility of this pope and his love of the church, and his courage to recognize that, as he says in his declaration, that he has come to the conclusion that he doesn’t have the physical energy any longer to discharge his duties as pope.That recognition says to me he’s a very humble and honest person. … We turn our attention now to our prayers for the Holy Father and to see  what the next steps will be.”

“At this time it is appropriate for the Church and all people of good faith to reflect on Pope Benedict’s legacy and achievements.  He brought unique capabilities to the papacy as a highly qualified scholar and teacher, and as Prefect of the Congregation for the Doctrine of the Faith, in service to Blessed John Paul II.  His fidelity to maintaining the truth and clarity of the Catholic faith, to cultivating ecumenical and interfaith dialogue and in reaching out to inspire the next generation of Catholics have been great gifts to us all.”

‘‘If the pope himself has now, after thorough consideration, come to the conclusion that he no longer has sufficient strength to exercise his office, that earns my very highest respect. In our time of ever-lengthening life, many people will be able to understand how the pope as well has to deal with the burdens of aging.”

“The pope is not any man. He is the vicar of Christ. He should stay on to the end, go ahead and bear his cross to the end. This is a huge sign of world destabilization that will weaken the Church.”

“With Pope Benedict XVI’s shocking resignation this morning, evangelical Christians might be tempted to see this the way a college football fan might view the departure of his rival team’s head coach. But the global stakes are much, much higher. As Pope Benedict steps down, I think it’s important for us to recognize the legacy of the last two bishops of Rome that we ought to honor and conserve: an emphasis on human dignity.”

— Russell D. Moore, dean of the School of Theology at The Southern Baptist Theological Seminary

“Throughout his career, Benedict XVI has conferred upon the church the great gift of his theological wisdom, in a special way deepening our understanding of Catholic education and the role of the Catholic educator. He has been a public figure of considerable importance, reminding the world of the inviolable dignity of the human person, and the call of the Gospel to charity.”

— John Garvey, president of The Catholic University of America

“Pope Benedict XVI has served the Catholic Church during a time of significant challenge. He is a highly respected, traditional and conservative theologian. As the Prefect of the Congregation for the Doctrine of the Faith, his assistance with guiding the Joint Declaration on the Doctrine of Justification was a major contribution for Lutherans and Catholics.”

“While Pope Benedict’s resignation is certainly unexpected, it is yet one more sign of the strong leadership he has exhibited throughout his papacy. It takes a particular kind of wisdom to know when to step down and a wonderful humility to do so.”

“The Church feels today a special need to thank Benedict XVI for his rich and fruitful magisterium, and also for his humble and generous example of service to the Church and the world. In this singular moment in the Church’s history, the faithful of the Prelature — priests and laity — are praying for Benedict XVI and all his intentions. And united to the Pope and the entire Church, we are asking the Holy Spirit to pour out his grace in abundance on the people of God and its pastors.”

“Pope Benedict XVI has exemplified moral courage and an unwavering commitment to the Gospel message during his nearly eight-year tenure as Holy Father of the Roman Catholic Church. He has been a steadying influence who has shown leadership at a critical time in the Church’s history. As he announces his retirement, we honor him for his lifelong service to the Lord and his inestimable intellectual contribution to Christian orthodoxy. We also pray for the Cardinals as they begin deliberations to choose his successor. As encroaching secularism, radical Islam, and evil in all its forms threaten Western civilization, this is a momentous time in the history of the Church. Whether Catholic or Protestant, we join in praying for the triumph of our faith and the glory of our Lord.”

“We offer the American Muslim community’s best wishes to Pope Benedict XVI as he leaves his position as head of the Roman Catholic Church. … We look forward to continued and growing positive interfaith relations under the new pontiff as Muslims in the United States and worldwide join with people of all faiths and cultures who seek to make a better world.”

“I have found the Pontiff to be warm and authentic in our conversations and meetings. In addition, I appreciate his courage of ideas, even when they did not resonate with contemporary attitudes. I was especially moved by his boldness in warning us of the dangers of moral relativism and the tyranny of self-centered ideologies.”

“The prayers and gratitude of American Catholics are with Pope Benedict XVI today. The Holy Father’s decision displays extraordinary humility and love for the church, two things that have been the hallmarks of his service. … People of all nations have been blessed by the sacrifices he has made to sow the seeds of hope, justice and compassion throughout the world in the name of our Lord and savior.”

— John Boehner, Speaker of the House of Representatives