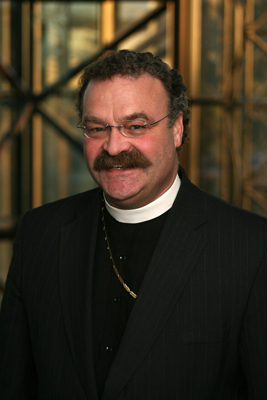 The Rev. Matthew Harrison was elected July 13, 2010 as the president of the Lutheran Church-Missouri Synod. RNS photo courtesy LCMS.

ST. LOUIS (RNS) A decision by the leader of the Lutheran Church-Missouri Synod to censure a pastor for participating in a prayer service for victims of the Sandy Hook school massacre has reopened old wounds for an often politically divided denomination.

The Rev. Matthew Harrison asked the Rev. Rob Morris, pastor of Christ the King Lutheran Church in Newtown, Conn., to apologize for participating in a public interfaith vigil with President Obama two days after a gunman killed 20 children and six adults at the town’s elementary school.

Morris apologized and Harrison accepted, but the exchange sparked a media firestorm with charges that the 2.4 million-member denomination was intolerant, insensitive or both. On Sunday (Feb. 10), Harrison said he made a bad situation even worse.

“As president of The Lutheran Church—Missouri Synod, I take responsibility for this debacle,” he said. “I handled it poorly, multiplying the challenges. I increased the pain of a hurting community.”

Now Harrison’s handling of the Newtown service is almost certain to be a factor as he seeks re-election in July when delegates gather in St. Louis for their triennial convention.

The Missouri Synod’s constitution prohibits members from taking part in worship services that blend the beliefs and practices of Lutherans with those of other faiths and Christian denominations.

In 2001, a similar moment threatened the administration of Harrison’s predecessor, the Rev. Gerald Kieschnick, after he allowed a pastor, the Rev. David Benke, to take part in an interfaith prayer vigil at Yankee Stadium in the weeks after the 9/11 attacks.

Conservative elements in the church called for Kieschnick’s removal, and Benke was eventually suspended in June 2002. Benke was later reinstated, but the episode dogged Kieschnick’s presidency. He lost re-election in 2010.

In a recent email newsletter, Kieschnick said “the overwhelming majority of people both in and beyond the LCMS who hear the request for apology and/or removal shake their heads in disgust and dismay.”

In 2004, the synod — under Kieschnick — issued guidelines for participating in public events, including the acknowledgment of “once-in-a-lifetime” situations which “can be evaluated only on a case-by-case basis.”

“I did not believe my participation to be an act of joint worship, but one of mercy and care to a community shocked and grieving an unspeakably horrific event,” Morris explained in his apology. “However, I recognize others in our church consider it to constitute joint worship and I understand why. I apologize where I have caused offense by pushing Christian freedom too far.”

The controversy over the Newtown vigil had flared on the Internet even before the Dec. 16 service as conservative voices within the synod began criticizing him online for planning to participate.

Perhaps the harshest critics were those affiliated with the Brothers of John the Steadfast, a group who identify themselves as confessional Lutherans who stress strict adherence to the Book of Concord, the 16th-century work that defined the central doctrines of Lutheranism.

Confessional Lutherans were also critical of Kieschnick for allowing Lutheran participation in the 9/11 event, and the Brothers of John the Steadfast are credited with helping Harrison oust Kieschnick three years ago.

Morris defended himself on the Steadfast Lutherans website, citing the disclaimer “that no clergy member present was endorsing the religions of others, or recanting any portion of their own beliefs, but only offering their love, care, and prayer for their families and communities.”

But the Rev. Timothy Rossow, a pastor from Naperville, Ill., and Steadfast Lutherans’ leader, compared the disclaimer to a man whose wife had caught him with a prostitute and who offered her an excuse that “it was OK because before we had sex we each claimed that this had no bearing on any other physical relation that we have, right or wrong, with any other person.”

Another pastor said that by participating in the service Morris had sinned. “There is no other way to say it,” he wrote.

One commenter said Morris’ participation in the service “does more harm to the souls of the survivors than any gunman could ever do.”

“Does anyone else agree that Pastor Morris’ action is more abominable than those committed by the gunman?” the commenter asked.

“Yes I do,” Rossow answered in a post that followed. “The gunman killed the body which lasts for 70 or 80 years. … False teaching and practice kills the soul which lives for eternity in heaven or hell.”

Rossow calls Harrison’s heavy hand in the Newtown situation a “come to Jesus moment” for the president, and many conservatives believe Harrison took a stand for Lutheran orthodoxy.

“In Matthew Harrison God has richly blessed our Church with a truly confessional theologian,” wrote one pastor on the Steadfast Lutherans site.

But some pastors and academics — most of whom did not want to speak publicly — reacted angrily to Harrison’s moves against the Connecticut pastor.

“I would hope that this latest action by Harrison would be sufficient to lead LCMS electors to remove him from the office of president and to replace him with someone who is wiser and more evangelical,” said the Rev. Matthew Becker, interim pastor at Immanuel Lutheran Church in Michigan City, Ind.

The Rev. Scott Seidler, pastor of Concordia Lutheran Church in Kirkwood, Mo., sent a message to his congregation saying that “with thousands of other pastors and church leaders from across our denomination, I find President Harrison’s actions to be both outside the bounds of his denominational authority and inconsistent with the example of Jesus Christ himself.”

Seidler said that Lutherans “will not soon forget the heavy-handed reproof of a young pastor who interceded for the little children. It is quite possible Matt Harrison is a one-term president.”