(RNS) When Cardinal Joseph Ratzinger was elected Pope Benedict XVI in 2005, the surprising choice cast a pall over the liberal wing of the flock and left conservatives giddy with the prospect of total victory. Ratzinger had for decades served as the Vatican’s guardian of orthodoxy, the man known as “God’s Rottweiler,” and his vocal fans were crowing about the glorious reign to come. 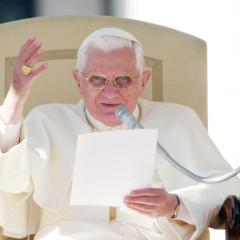 Pope Benedict XVI waves to the crowd during one of his weekly general audiences in St. Peter’s Square at the Vatican in 2007. RNS photo by Gregory A. Shemitz.

“He’ll correct the lackadaisical attitudes that have been able to creep into the lives of Catholics,” the Rev. M. Price Oswalt, an Oklahoma City priest who was in St. Peter’s Square that April day, told The New York Times. “He’s going to have a German mentality of leadership: either get on the train or get off the track. He will not put up with rebellious children.”

Now, however, with Benedict set to leave office eight years later in an unprecedented departure, many on the Catholic right are counting up the ways that Benedict failed them, and wondering how their favorite watchdog turned into a papal pussycat.

“Although Pope Benedict XVI’s highly unusual resignation is said to be for reasons of health, it fits the character of his papacy: All his initiatives remain incomplete,” Michael Brendan Dougherty, a Latin Mass enthusiast, lamented at Slate the day the pope made the shocking announcement that he would resign on Feb. 28.

“He was consciously elected to rescue the church from itself, but he failed to finish what he started,” Dougherty said.

Since then the criticisms have continued to come in from a range of onetime champions, and on a spectrum of issues: Benedict did not sufficiently clean house in the clergy sex abuse scandal and did not appoint enough hard-liners to the hierarchy; he did not bring the old Latin Rite schismatics fully back in the fold, a mission that will likely end with his pontificate; he was too quick to mollify Muslims or pursue ecumenical gestures; and he charted, as Dougherty put it, “a precarious middle course” theologically.

Even his three encyclicals — the most authoritative documents a pope writes — focused on social justice issues and often embraced the kind of liberal policy prescriptions that sent conservatives into conniptions.

To be sure, liberals would note that theologians and even American nuns were investigated and disciplined under Benedict’s rule, and he appointed some pretty serious conservatives as bishops and promoted others to the College of Cardinals that will choose one of their number to succeed Benedict.

But if he was not exactly a pleasant surprise to the left, neither did he fulfill the great expectations of the right.

That vaunted German managerial instinct? It seemed to have no effect, as the Vatican under Benedict became a mismanaged palace of court intrigue and financial scandals, lurching from gaffe to disaster, and all exposed to public view when the pope’s own butler leaked reams of internal papal documents.

Benedict was “as bad as a pope has been for 200 years,” Joseph Bottum wrote in a withering verdict delivered in the latest edition of The Weekly Standard. “All in all,” he said, “a terrible executive of the Vatican.”

Even his resignation confounded many of his conservative supporters.

Some saw Benedict’s act as a repudiation of the decision by his predecessor, John Paul II, to die with his boots on despite his public struggle with infirmity — a move conservatives at the time loudly proclaimed the only possible option. Others, like New York Times columnist Ross Douthat, worried that Benedict, this most traditional of churchmen, was introducing a modern innovation that would undermine future popes and embolden those looking for a more accountable papacy.

So how is it that Catholic conservatives could go so quickly from ecstasy to agony? To a great degree, it is the way of the world, even in the church.

Partisans tend to graft their own agendas and aspirations onto their favored candidates, whether presidents or popes. Sacred conclaves are hotbeds of messianism every bit as much as today’s domestic electoral process, in part because the church is not immune from politics or polarization.

Disappointment was inevitable because the hopes of Benedict’s fans had blinded them to the parts of his writings (on charity and justice, for example) or his personality traits (such as his loyalty to friends, no matter how incompetent) that didn’t fit with their plans.

That leads to a second factor, which is that popes may enjoy great authority but they cannot act like autocrats. Benedict, more than his supporters, knew he had to be the pastor of a huge global flock, not just a “bad cop” who tells people to follow the rules and drums them out when they disobey. As he told dinner companions early in his pontificate, “It was easy to know the doctrine. It’s much harder to help a billion people live it.”

Finally, Ratzinger was always at heart — and in his head — a scholar and theologian. He had a German’s intellectual bearing but little of his countrymen’s renowned knack for organization. “I am not an administrator,” he warned his fellow cardinals during the 2005 conclave as he saw the momentum swinging in his direction.

Benedict spoke the truth then, as clearly as he always did. The irony is that his most ardent fans, rather than his liberal foes, apparently did not want to listen.