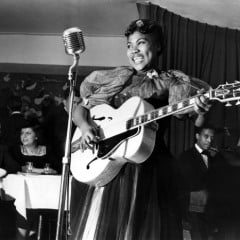 (RNS) Before Elvis and Chuck Berry and Johnny Cash. Before Aretha and Whitney and Beyonce. Before the blues met gospel and conceived rock ‘n’ roll, there was Sister Rosetta Tharpe.

The first gospel superstar, Tharpe was a guitar hero in a flower-print dress whose bluesy chops and strutting style would be mimicked by countless acolytes, both white and black.

Though no longer a household name, Tharpe gets the star treatment in a new documentary for the PBS series “American Masters.” “Sister Rosetta Tharpe: The Godmother of Rock & Roll” will be broadcast Friday (Feb. 22) on PBS in honor of Black History Month.

The documentary offers an overdue coda to an unsung influence on American music. Tharpe died in 1973, and until 2008 her Philadelphia grave lay unmarked. But without the “original soul sister,” rock might never have rolled, says Tharpe biographer Gayle Wald. 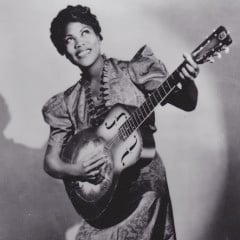 “When you see Elvis Presley singing early songs in his career, I think you can imagine that he is channeling Rosetta Tharpe,” Wald says in the PBS documentary. “It’s not an image we’re used to thinking about when we think about rock ‘n’ roll history. We don’t think about the black woman behind the young white man.”

Born in 1921 in Cotton Plant, Ark., by age 6 Tharpe was playing tabernacles and tent revivals with her mother, an itinerant evangelist in the Church of God in Christ. If a Pentecostal fire kindled the congregation, the talented tot often fanned the flames.

“When she came and they saw the freedom she expressed in her singing and dancing, it woke up the congregation,” says COGIC Pastor Robert Hargrove in “Sister Rosetta Tharpe.” 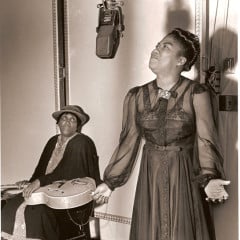 But after divorcing a pastor who treated her more like a meal ticket than a helpmate, Tharpe set out for New York City, where she joined a big band and jammed with the likes of Duke Ellington and Cab Calloway. “Singer Swings Same Songs in Church and Night Club,” reads a Life magazine headline from 1939.

Recording hits like Thomas Dorsey’s “This Train,” Tharpe became the first gospel singer to cross the divide between spiritual and secular music. She also sang saucier songs, to the chagrin of her churchgoing fans.

“It was like a bomb dropped on gospel music when she flipped,” says Ira Tucker Jr., whose father, a member of the gospel group The Dixie Hummingbirds, toured with Tharpe. “They viewed it almost like a death. ‘Rosetta, she’s gone, she went over.’”

Tharpe returned to her gospel roots, however, and stayed so famous that 20,000 paying fans crowded into Washington’s Griffith Stadium to watch her third wedding, in 1951. Still in her gown, the bride played electric guitar from a stage in center field. 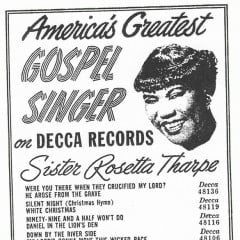 Though Tharpe’s singing sold records, it was her blues-fueled guitar riffs that inspired upcoming axemen like Eric Clapton, Pete Townshend and Jeff Beck.

“She was a powerful force of nature, a guitar-playing singer and evangelist,” Bob Dylan has said. “There were a lot of young English guys who picked up the guitar after getting a look at her.” 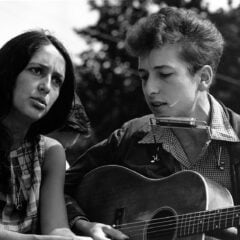