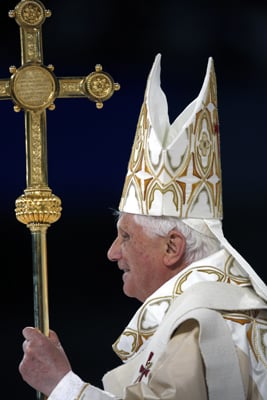 Pope Benedict XVI standing near the end of the papal Mass at Yankee Stadium. (Photo by Hilton Flores)

VATICAN CITY (RNS) With three days left before his resignation on Thursday, Pope Benedict XVI on Monday (Feb. 25) allowed cardinals to move up the start of the conclave that will elect his successor.

The new rules will allow the College of Cardinals to waive a 15-20 day waiting period between the end of the pontificate and the opening of the conclave.

“The cardinals will be permitted to bring forward the start of the conclave, if they are all present,” states the decree, called a “motu proprio,” or personal directive.

The change of rules comes as the Vatican announced the resignation of Scottish Cardinal Keith O’Brien as archbishop of St. Andrews and Edinburgh, after three priests and one former seminarian accused him of “inappropriate acts” over several decades.

On Monday, Benedict also met with the three cardinals he had tasked with investigating the leak of confidential documents in the so-called Vatileaks affair.

According to a statement by the Vatican press office, the pope ruled that the final report of the investigation, “known only to himself,” will be handed over “solely” to the next pope.

During the meeting, Benedict acknowledged that the cardinals’ investigation revealed the “limitations and imperfections” introduced by the “human factor” in “every institution.”

But the pope also stressed that the report highlighted the “generosity and dedication of those who work with uprightness and generosity in the Holy See at the service of the mission entrusted by Christ to the Roman Pontiff.”