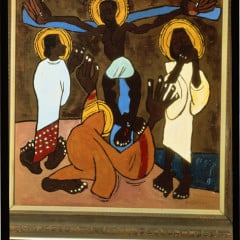 William H. Johnson’s ‘Jesus and the Three Marys’ (c. 1939-1940) – A new exhibit at New York’s Museum of Biblical Art makes one point clear and inescapable: Biblical narratives and imagery have been an underlining constant in the life of African-American Christians. RNS photo courtesy Howard University Gallery of Art, Washington, D.C.

NEW YORK (RNS) A new exhibit at New York’s Museum of Biblical Art makes one point clear and inescapable: Biblical narratives and imagery have been an underlining constant in the life of African-American Christians.

From the days of slavery onward, “African-Americans felt the Bible was a powerful tool that established their quest for freedom and identity amidst the madness they were living in,” said guest curator Leslie King-Hammond. “The Bible was the constant.”

King-Hammond is the founding director of the Center for Race and Culture at the Maryland Institute College of Art and helped organize the exhibit, “Ashe to Amen: African Americans and Biblical Imagery.” (The “ashe” in the exhibition’s title derives from the African Yoruba language and refers to an artist’s power or “inner eye.”)

The exhibit of 59 works reveals a wide breadth of genres, from painting to crochet to sculpture. “There is no such thing as monolithic African-American art,” said King-Hammond, adding that the exhibit  is a way for African-American artists who have worked in the visual arts to get an overdue recognition for their “profound achievements.”

The timing of the exhibit — beginning during Black History Month, and later traveling to other locations in Maryland and Tennessee — is also deliberate. This year marks both the 150th anniversary of President Abraham Lincoln’s Emancipation Proclamation and the 50th anniversary of the March on Washington and the Rev. Martin Luther King’s landmark “I Have a Dream” speech.

“The timing is just right,” King-Hammond said in an interview.

Why has the Bible drawn so much attention from African-American artists? In short, history and lived experience. 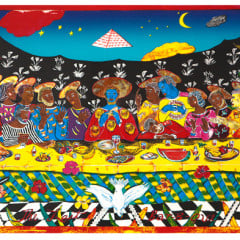 Margo Humphrey’s ‘The Last Bar-B-Que’ (1989) – A new exhibit at New York’s Museum of Biblical Art makes one point clear and inescapable: Biblical narratives and imagery have been an underlining constant in the life of African-American Christians. RNS photo courtesy of the Hampton University Museum, Hampton, VA.

Those who have roots in Africa are the products of many belief systems, and religion, “as it moved from geography to geography, never lost its sense of potency,” King-Hammond said. “Practice and belief have been so resilient. It’s the thing that helped them survive.”

The Bible was first introduced to American slaves through oral tradition. Its narratives and parables of the enslaved finding freedom served as personal and communal inspiration amid the cruelties and absurdities of life in the United States, both during and after the American Civil War.

“(The Bible) quickly came to function as a language-world, the storehouse of rhetorics, images, and stories that, through a complex history of engagements, helped establish African Americans as a circle of the biblical imaginary,” biblical scholar Vincent L. Wimbush noted in his 2003 book, “African Americans and the Bible.”

Or, as King-Hammond put it, “It gave them meaning to survive the most horrendous situations.”

Given such depth of experience, it is not surprising that the exhibit’s featured works by Romare Bearden, Sister Gertrude Morgan, Henry Ossawa Tanner and others share thematic links. Yet each is a distinctly personal reflection of artistic vision. “Going into that personal religious space,” King-Hammond cautioned, “that’s very guarded space and you have to tread carefully.” This tribute to the black church’s “call and response” tradition has its own back story — the fate of the piece was in question when Bailey’s studio along the East River in Manhattan flooded during Hurricane Sandy. The fact that it survived and is displayed so beautifully at the museum is itself, King-Hammond believes, a “miracle.”

Other works are striking for being ahead of their time — perhaps most notably the work of William H. Johnson. His bold and vivid “Jesus and the Three Marys,” from 1939-40, features a black Jesus on a cross: denoting the era’s practice of lynching but also hinting at the emergence of black liberation theology in the 1960s and ’70s by putting black religious experience and representation front and center.

Some works combine a mixture of solemnity and whimsy. Margo Humphrey’s lithograph, “The Last Bar-B-Que,” from 1989, “translates the biblical narrative of the Last Supper into a background picnic,” as a museum description puts it, with watermelon and chicken joining the wine and bread at the table. Patricia C. Pongracz, the museum’s acting director, said Humphrey’s work suggests a very pointed question, “What does a savior look like?” 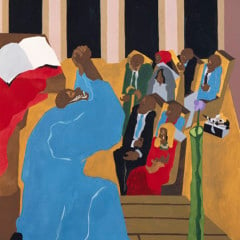 Humphrey herself says of the piece — where all depicted are African-American and two of the disciples are women — that it is “a rewriting of history through the eyes of my ancestry, a portrayal of a savior who looks like my people.”

(“Ashe to Amen” is on view at the Museum of Biblical Art in New York City through May 26, alongside a smaller exhibit, “Reaching Out: American Bible Society and the African American Community,” The exhibit will travel later to the Reginald F. Lewis Museum in Baltimore, and the Dixon Gallery and Gardens in Memphis, Tenn.)