(RNS) Together, Islam and Catholicism represent about 40 percent of the world’s population, so the estimated 1.6 billion Muslims in the world have more than a passing interest in the new pope who will shepherd the world’s 1.2 billion Catholics. 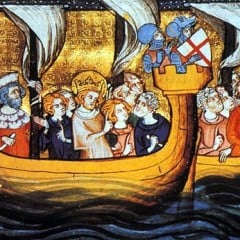 Too often, relations between the two groups have been shaped by conflict — the Christian Crusades of 1,000 years ago are still a raw wound for many Muslims, and more recently, Muslim extremist attacks on Christian communities across Africa and the Middle East have left the Vatican deeply concerned.

“What the pope says or doesn’t say can have enormous consequences on such relations,” said Imam Feisal Abdul Rauf, founder of the Cordoba Initiative, an organization dedicated to improving Muslim-Western relations, and the founder of the controversial so-called Ground Zero mosque in New York.

The selection of the 266th pope comes at a critical juncture in Muslim-Catholic relations, which have been marred by persecution of Christians in the Muslim world, Islamophobia in Western countries, Western military action in Afghanistan, Pakistan, and Iraq, and rioting between Muslims and Christians across Africa.

While many Muslims said they saw an improvement in Muslim-Catholic relations under Pope John Paul II, they say Pope Benedict XVI’s papacy was more problematic.

Most worrisome, Muslims say, was in 2006 when Benedict spoke at the University of Regensburg in Germany and quoted a 14th-century Byzantine emperor who said Islam’s Prophet Muhammad had only brought “evil and inhuman” things to the world, and that Islam was “spread by the sword.” Those remarks touched off a series of deadly riots in several Muslim countries.

Muslims were also concerned by the Vatican’s opposition to Turkey joining the European Union, and in replacing Archbishop Michael L. Fitzgerald, a British-born Islam expert who was seen as friendly with Muslims, as head of the Pontifical Council for Interreligious Dialogue in 2006.

Since then, Benedict made several trips to Islamic countries, including Turkey, which repaired some of the damage, and many Muslims give Benedict high marks for his efforts to re-engage Muslims.

“Pope Benedict XVI made a significant effort to reconcile with Muslims after his Regensburg speech,” tweeted Ingrid Mattson, chair of Islamic studies at Huron University College in Ontario and a former president of the Islamic Society of North America.

Ebrahim Moosa, an Islamic studies professor at Duke University, said the Regensburg fiasco showed the need for improved ties. “The Vatican is invested in good relations with the Muslim world, and under a new pope there is no reason to believe that it would be any different,” he said. 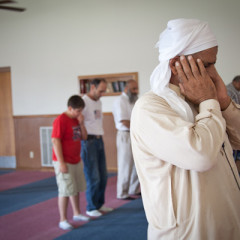 Muhhamad Shafiq says a prayer into the microphone during 1:30 prayer at the Islamic Society of Greater Kansas City mosque on Tuesday afternoon, June 26, 2012. RNS photo by Sally Morrow

While many Muslims acknowledge the interfaith efforts Benedict made, many also hope a successor will be more like John Paul II.

“This pope had not really been a bridge-builder and there will be hope that the next one will be someone who tries to heal wounds and build bridges,” said Adil Najam, vice chancellor at Pakistan’s Lahore University of Management Sciences, and former director of Boston University’s Pardee Center for the Study of the Longer-Range Future.

Some Muslims believe that a pope from Africa or Asia, where Muslims and Christians live alongside each other in sometimes volatile conditions, would benefit Muslim-Christian relations.

“There could be a lot of opportunity. A young pope could be more in tune with the globalized world and all the interfaith activity that takes place,” said Qamar-ul Huda, an expert on religious conflict and reconciliation at the United States Institute of Peace in Washington. “They live in pluralistic societies, and have to have good relations with Muslims so their communities get along on a day-to-day basis.”

While many Catholic leaders acknowledged Benedict’s missteps and the need for greater dialogue, many also said Muslims could do more to address the persecution of Christians in Muslim countries.

In 2011, when Benedict condemned Muslim attacks against Christian communities in Egypt, Iraq and Nigeria, officials at the renowned Al-Azhar University in Cairo called off dialogue with the Vatican, citing the pope’s “insults.”

“A new pope will not just want to talk about love and peace. He will want to talk about the difficult subjects, too,” said the Rev. Patrick J. Ryan, a Jesuit priest and professor of religion and society at Fordham University in New York.

Rauf agreed that Muslims need to do more about the persecution of Christians in Muslim nations. “We can’t do enough to combat the militancy that you see in Muslim countries in various parts of the world against their fellow countrymen who are Christian,” said Rauf.

A key appointment will be who the new pope chooses to advise him on interfaith dialogue. Fitzgerald was replaced by French Cardinal Paul Poupard, who served until September 2007, when he was replaced by the current prefect, Cardinal Jean-Louis Tauran. Last July, Benedict named another Islam expert, the Rev. Miguel Ayuso Guixot, as the No. 2 official at the interfaith office.

“He’s a man of great capability,” said Ryan. “He’s a name to be watched. He will be very influential.”

News
What four strangers of different faiths learned while living together during a pandemic
News
Each year 1,000 Pakistani girls forcibly converted to Islam
News
Pope proclaims year of families, offers advice to keep peace
Islam Beyond Phobia
What Jesus means to me as a Muslim
News
Concern among Muslims over halal status of COVID-19 vaccine