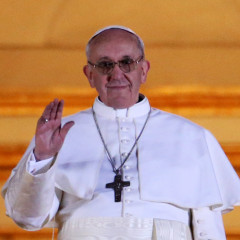 As a Catholic, that’s been my mantra from the moment Pope Francis I asked for blessings from the faithful gathered outside St. Peter’s earlier today. There will be plenty of opportunities in the coming days to look more closely at the new pope’s comments on controversial social issues that are so important to Catholics here in the US and around the world, but today is a day for celebration.

So, what am I celebrating?

Commitment to the poor.

In choosing the name Francis, the new pope uses symbolism to identify with a saint whose primary concern was caring for the poor, followed closely by rebuilding the church, St. Francis of Assisi. As Archbishop of Buenos Aires, he eschewed the trappings that accompany the office, electing to cook his own meals and use public transportation.

He spoke out against economic inequality Argentina:

We live in the most unequal part of the world, which has grown the most yet reduced misery the least. The unjust distribution of goods persists, creating a situation of social sin that cries out to Heaven and limits the possibilities of a fuller life for so many of our brothers.

He decried the conditions for the working poor:

Here in Buenos Aires, in the big city, in this city that is more modern every day, there also are migrant brothers and sisters who are working 20 hours a day, 18 hours a day, they get very little pay and a salami sandwich. … These modern-day slave traders could care less that kids are dying.

The AP reports that:

Catholics are still buzzing over his speech last year accusing fellow church officials of hypocrisy for forgetting that Jesus Christ bathed lepers and ate with prostitutes.

The Jesuit priest James Martin wrote that his priority as pope would be to listen to the poor. Perhaps Francis agrees.

Francis has lambasted those who view the priesthood as loftier than lay life. Again, from the AP:

“In our ecclesiastical region there are priests who don’t baptize the children of single mothers because they weren’t conceived in the sanctity of marriage,” Bergoglio told his priests. “These are today’s hypocrites. Those who clericalize the Church. Those who separate the people of God from salvation. And this poor girl who, rather than returning the child to sender, had the courage to carry it into the world, must wander from parish to parish so that it’s baptized!”

“These are today’s hypocrites. Those who clericalize the Church. Those who separate the people of God from salvation.”

Was Francis’ request that the lay faithful assembled outside St. Peter’s telling of his desire to work alongside the laity, not above them as some bishops seem to do? Encouraging priests, and more importantly bishops, to be with the people and learn from them would mark a huge move forward for the church.

Symbols are important, and when Francis visited a hospice in 2001 to meet with individuals living with HIV-AIDS, it showed his compassion for those suffering illness. Such a visit might seem basic for those trying to live out Gospel values. When a Cardinal does it, it sends a strong message.

The Catholic blogger Andrew Sullivan has a great series of posts about Francis, and calls attention to a couple interfaith items that are encouraging.

In the Benei Tikvá Slijot Synagogue to celebrate the Jewish new year, Cardinal Jorge Mario Bergoglio recalled that God invites us to ask forgiveness for sin.

The archbishop of Buenos Aires participated in the Rosh Hashana celebration Saturday, saying that he was there to examine his heart, “like a pilgrim, together with you, my elder brothers.”

The Houston Chronicle notes his friendship with a head of the Anglican church in South America:

“He never dresses like a cardinal,” said Gregory James Venables, a close friend of Bergoglio’s who heads the Anglican Church in southern South America. “It’s not to be scruffy. But that’s his character. He is very, very, very humble.”

There’s lots of information about Francis flooding the Web today. It will take several weeks to gain a fuller picture of his background—the good, the bad, and the ugly. It may take a couple of years to figure out what kind of pope he will be, though we should have some hints as he begins appointing leaders in the Curia, especially his selection as Secretary of State.