WASHINGTON (RNS) Jews worldwide welcomed newly elected Pope Francis as a friend on Wednesday (March 13), and pointed in particular to his sympathetic and strong reaction to the 1994 bombing of a Jewish center in his native Argentina — the deadliest bombing in the country’s history. “As far as I have heard and read in the few minutes since he was elected pope, he has shown deep signs of respect and friendship towards the Jews,” said Riccardo Di Segni, the chief rabbi of Rome. “It’s a good starting point.”

As Cardinal Jorge Mario Bergoglio, the archbishop of Buenos Aires, Francis “has had a warm relationship with the Jewish community of Argentina, and enjoyed close friendships with many prominent rabbis,” said Rabbi David Rosen, international director of interreligious affairs at the American Jewish Committee.

The Jewish community of Argentina — 250,000 people living predominantly in Buenos Aires — is the largest in Latin America by far.

Bergoglio’s statements after the Buenos Aires bombing still resonate 20 years later with Jews in Argentina and beyond, in part because the crime remains under what many consider a purposefully thwarted investigation, and continues to make headlines in Argentina, Israel and the Jewish press.

When Islamic militants — widely thought to be from Iranian-backed Hezbollah — attacked the Jewish center, Bergoglio “was forthright not only in his condemnation of the act but in his solidarity with the Jewish community,” said Rosen.

Just two months ago, the government of Argentina announced a joint Argentinian-Iranian commission to investigate the nearly 20-year-old suicide bombing, which killed 85 and wounded 300.

Rosen said he is unaware of any statement Bergoglio made regarding the new commission, which strikes many Jews as allowing the criminals to investigate the crime.

But “I am told that he is not popular with the present government because he takes strong, principled stands on many issues,” Rosen said.

Jewish-Catholic relations have improved markedly since the Second Vatican Council (1962-1965), when the church took a firm stance against anti-Semitism and the age-old teaching that Jews were responsible for the death of Christ.

Relations suffered a few bruises, however, under Pope Benedict XVI, especially when he allowed expanded use of the old Latin Mass, which includes a Good Friday prayer that the “veil” be lifted from Jewish hearts. After Jews complained, Benedict tweaked the prayer.

Benedict was also widely criticized when he lifted the excommunications of four breakaway traditionalist bishops, including one, Richard Williamson, who turned out to be a vocal Holocaust denier. Benedict later admitted an Internet search could have turned up Williamson’s background. 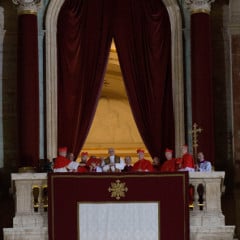 “We welcome Pope Francis I to his new role as leader of the Catholic Church,” B’nai B’rith International President Allan J. Jacobs said in a statement. “Catholic-Jewish relations had remained a focus of Pope Benedict XVI and we look forward to continuing the solid foundation that already exists for interfaith dialogue.”

Other Jewish leaders and scholars noted that Francis’ relatively advanced age — 76 — is important to the Jewish community, in that the Holocaust happened during his lifetime and can conjure memories for him of the horrors to which anti-Semitism can lead.

“There were many people who said that after Benedict that there would not be a pope who lived through the Second World War,” said Rosen of the AJC.

David Novak, a professor of Jewish Studies and philosophy at the University of Toronto, said he hopes Francis improves on his predecessor’s prioritization of Jewish-Catholic relations.

Benedict does not have a bad record with the Jews, Novak said, but he didn’t give it as much attention as Pope John Paul II, who called Jews the “elder brethren” of faith.

“I would like to see a kind of renewal of Jewish-Catholic relations which I think reached a high point during the pontificate of John Paul II,” said Novak, who has written extensively on the relationship between the two faiths.

Among other overtures to the Jews under John Paul, the Holy See recognized the State of Israel in 1997. He was the first pope to visit Auschwitz, to bless Israel, and to apologize for Christian acts against Jews.

“If the Catholics don’t canonize him,” Novak said, “the Jews should.”

Jewish groups also said Francis would pay close attention to social justice issues on which Jews and Catholics can work together.

“We look forward to our ongoing partnership with the Catholic church in combating poverty, a great legacy of the Pope during his tenure as Cardinal of Buenos Aires,” said Rabbi Steve Gutow, president of the Jewish Council for Public Affairs, in a statement.

“In a world so awfully divided by wealth and opportunity, may his teaching and example help to heal our broken world and bring us closer to a time when no person goes to bed hungry.”