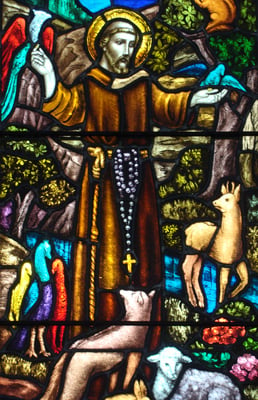 VATICAN CITY (RNS) As the votes in the conclave moved inexorably in his direction – as the tally was getting “a bit dangerous,” he recalled with a smile – Cardinal Jorge Bergoglio was comforted by his longtime friend, Brazilian Cardinal Claudio Hummes, who was sitting next to him in the Sistine Chapel.

Then as the votes for the Argentinian Bergoglio passed the two-thirds threshold needed to elect him pope on Wednesday, applause broke out among the 115 cardinals. Hummes again turned to Bergoglio, who now had just a few moments to decide what name he would take as pope.

“He embraced me, kissed me, and said: ‘Do not forget about the poor!’ And that word” – he pointed to his heart – “entered here,” the new pope said Saturday in an audience with thousand of journalists who have been in Rome covering the transition.

“The poor, the poor. When he spoke about the poor, I thought of St. Francis of Assisi,” said the pope, who took the name of Francis, as he continued in a bit of off-the-cuff storytelling that has become a charming hallmark of his new pontificate. “Then, I thought of the wars.”

“While the voting continued, until all the votes were counted: It is St. Francis, man of peace,” he remembered thinking to himself.

“And this is how the name came to me, in my heart: Francis of Assisi. The man of the poor, the man of peace, the man who loves and cares for creation – in this moment when we don’t have a very good relationship with creation, no?” he added.

“A man who gives us this spirit of peace, a poor man … Ah, how much I would like a poor church, for the poor!”

This was Francis’ first extended public explanation of why he chose his new name, and in the meeting with journalists he again highlighted the themes of caring for the poor and promoting peace that he has stressed in the few days since his election – only this time he added an explicit tie to environmentalism.

Francis of Assisi, who famously preached to birds, is something of a patron saint for environmentalists; that Pope Francis would make that connection early on could augur an important theme of his ministry.

His predecessor, Benedict XVI, also regularly stressed the importance of caring for the earth until his resignation last month. But the theme was often lost amid the gaffes and crises that plagued his pontificate.

Francis has so far been received warmly by the public, and to a great degree by the media, in part because he is signaling a radical shift in emphasis for the church through his own actions.

He has shunned many of the trappings of papal power, for example insisting on returning to his hotel the day after his election to pay his own bill. Such breaches of protocol are almost unheard of in the rarefied culture of the Vatican.

Francis continued to telegraph that low-key but familiar style on Saturday, and was repeatedly interrupted with applause.

In talking to the journalists in the Vatican’s main audience hall, the pope went on to explain that after choosing the name Francis some of the cardinals started kidding him about other papal names he could have taken.

“Ah, you should have called yourself Adrian, no? Because Adrian VI was a reformer and we need reform!” one cardinal told the new pope.

“And another said to me, ‘No, no you should have called yourself Clement.’ But why Clement? ‘Clement XV – so you would have taken revenge on Clement XIV” who was famous for suppressing the new pope’s Jesuit order.