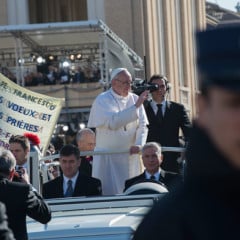 VATICAN CITY (RNS) Pope Francis issued a powerful call for the protection of the environment and of society’s most vulnerable during his formal installation Mass at the Vatican, while qualifying his papal power as a “service” to the church and to humanity.

The pope on Tuesday (March 19) celebrated a solemn Mass in St. Peter’s Square in front of an estimated 200,000 people, as well as political and religious leaders from all over the world.

During the Mass, Francis received the symbols of his papal authority over the world’s 1.2 billion Roman Catholics: the pallium, a lamb’s wool stole that recalls Jesus as the Good Shepherd, and the “ring of the fisherman.”

In keeping with the low-key style that has been the hallmark of his pontificate so far, Francis presided over a somewhat simpler, and definitely shorter, rite than the one that marked the start of Benedict XVI’s reign in 2005.

Francis was slowly driven around a sun-drenched St. Peter’s Square in an open-top car, shunning the bulletproof, air-conditioned popemobile preferred by his predecessors. At one point, he asked to stop the car and got out to bless a disabled person.

In his homily, delivered in Italian, Francis described the church’s mission as “respecting each of God’s creatures and respecting the environment in which we live.”

“It means protecting people, showing loving concern for each and every person, especially children, the elderly, those in need, who are often the last we think about,” he added.

Francis took his name from St. Francis of Assisi, the patron saint of the environment who first showed that the church’s mission includes “protecting all creation,” he said.

The pope’s homily was striking for its repeated references to environmental protection, highlighting what is likely to be a central theme of his papacy and setting up the 76-year-old pope as a leading activist against climate change.

When mankind fails to care for creation and for the weak, “the way is opened to destruction and hearts are hardened. Tragically, in every period of history there are ‘Herods’ who plot death, wreak havoc, and mar the countenance of men and women.” Francis addressed himself to “all those who have positions of responsibility in economic, political and social life,” asking them to be “’protectors of creation, protectors of God’s plan inscribed in nature, protectors of one another and of the environment.”

“Let us not allow omens of destruction and death to accompany the advance of this world!” he added.

The pontiff, who has won wide praise for his simple and low-key style since his election on March 13, also reflected on his role as pope, saying that the power it entails must actually be a service towards “the poorest, the weakest, the least important.”

“Let us never forget that authentic power is service, and that the pope too, when exercising power, must enter ever more fully into that service. … He must be inspired by the lowly, concrete and faithful service which marked Saint Joseph.” 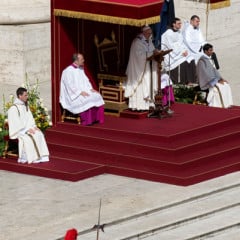 Pope Francis issued a powerful call for the protection of the environment and of society’s most vulnerable during his formal installation Mass at the Vatican, while qualifying his papal power as a “service” to the church and to humanity. RNS photo by Andrea Sabbadini

About 180 cardinals and senior church leaders joined the pope in celebrating the Mass, which was attended by more than 1,000 priests and seminarians. The rite began with Francis’ brief visit to the tomb of St. Peter beneath the central altar of the basilica named for the saint.

In his homily, the Argentine pontiff called on Christians not to be afraid to show “goodness or even tenderness” to other men.

Tenderness, he said, “is not the virtue of the weak but rather a sign of strength of spirit and a capacity for concern, for compassion, for genuine openness to others, for love.”

The Mass was attended by six sovereigns and 32 heads of state. The U.S. was represented by Vice President Joe Biden, House Minority Leader Nancy Pelosi and New Mexico Gov. Susana Martinez, among others.

For the first time in a thousand years, the papal installation was attended by the spiritual leader of Eastern Orthodoxy, Ecumenical Patriarch Bartholomew I. Bartholomew is often dubbed the “Green Patriarch” for his environmental activism.

In another first, the chief rabbi of Rome was also present after receiving a personal invitation from Francis.

In the hours before the Mass, Francis sent a surprise telephone message to a crowd of faithful gathered in Buenos Aires’ central square, the Plaza de Mayo, waiting to watch the Mass on giant screens. He asked them not to forget their former archbishop, “who though far away, cares so much for you.”