(RNS) Surrounded by baskets of fish and bread, with the Capitol at their backs, clergy attacked the Republican budget plan that came before the House Wednesday (March 20). 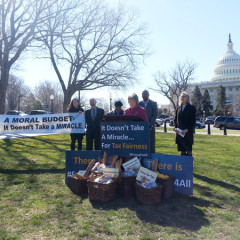 Sister Simone Campbell speaks in front of the Capitol surrounded by baskets of fish and bread during an event in which clergy attacked the Republican budget plan that came before the House Wednesday. RNS photo by Caleb Bell

The event’s theme—“It doesn’t take a miracle”—drew from the biblical story of the feeding of the five thousand, where Jesus turned a single meal of bread and fish into enough for thousands of people.

“It is immoral to cut government-supported programs that address human suffering while continuing to … pour billions of dollars into corporations,” said Sister Simone Campbell, a speaker at the rally.

Campbell, executive director of NETWORK, a Catholic social justice lobbying group, emphasized that “there is enough to go around if we share.”

The event was hosted by liberal Christian and Jewish advocates.

“The real issue is how we deal with the economic priorities of the nation,” said J. Herbert Nelson II, the director of the Presbyterian Church (U.S.A.)’s Office of Public Witness. “This whole nation needs to see a demonstration of how Jesus took little and made much with it.”

Robert Shapiro, a fellow at the Georgetown University School of Business, said that the Ryan budget probably isn’t going to pass. He took issue with the religious advocates’ approach to economic issues.

“The problem with the moral case in politics is that morality differs from person to person. It gets you into a situation where compromise is impossible,” Shapiro said. 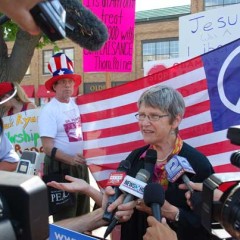 Sr. Simone Campbell talks to the press right after the nuns meeting with a representative of Rep. Paul Ryan in Janesville, WI. RNS photo by Phil Haslanger

Nelson and Campbell have lobbied about GOP budget plans before. In the summer of 2012, Campbell organized the Nuns on the Bus tour, which traveled the country speaking out against Republican budget proposals.

Ryan, who is Catholic, has said his budget accords with his church’s social teaching, including the idea that communities are best served by local charities and leaders.

News
Arizona candidate’s claim that he’s a military chaplain draws investigation
Follow us on Facebook!
Submit your photos to RNS