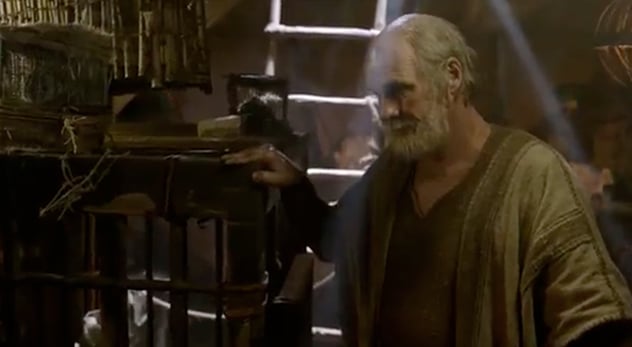 A scene from episode one of the “The Bible” miniseries depicts Noah telling the creation narrative as recorded in Genesis. But the passage wasn’t penned until centuries later.

If you listened to the critics’ reviews, History Channel’s The Bible was destined to become an underwhelming miniseries not worth viewers’ time. The Los Angeles Times dismissed it as “flat and often tedious,” Entertainment Weekly called it a “cheesefest,” and the Philadelphia Enquirer labeled it “cardboard characters surrounded by CGI.” Apparently, viewers weren’t listening. The premier pulled in 13.1 million viewers and each additional episode has garnered over 10 million. About 4 in 10 Americans have watched at least one episode of the show.

But some Christians questioned the historicity of some of the finer details of the show’s portrayals. The creators seem to have anticipated such controversy, which is why every episode begins with the following disclaimer: “This program is an adaptation of Bible stories. It endeavors to stay true to the spirit of the book.”

Inaccuracies are inevitable when one moves a work of art from one medium to another (in this case, from literature to film). Such deviations are acceptable depending on the kind and scale of liberties taken. In The Bible’s case, the inaccuracies are often significant but do not seem to compromise the Biblical meta-story itself. Even still, viewers should be aware of which flourishes deviate from the Biblical text. Here are the 10 that stick out in my mind. They are listed in chronological order:

1. Noah’s creation story. In the opening scene of episode one, Noah and his family are bouncing around inside the ark, tossed by the tumultuous waves outside. Noah recounts the creation narrative as it appears in Genesis, but there’s one problem: the story was not written until later. Conservative Christian scholars believe this story was drafted by Moses many centuries after Noah’s flood; more liberal scholars claim it was penned even later.

2. Angels know martial arts? When God’s messengers rescue Lot and his family from Sodom prior to the city’s destruction, the television show depicts them defending the fugitives with swords and Jet-Li-style martial arts. The Bible, however, makes no mention of such a battle or any kind of weapons used by the angels. Instead, the text claims Sodom’s residents were struck with blindness (Genesis 19), which would have made their escape a lot less exciting… and less bloody.

3. Abraham’s lamb. When the Jewish patriarch, Abraham, is about to sacrifice Isaac, the television show portrays a lamb showing up just in time to take Isaac’s place. In the Bible, however, it was a ram (Genesis 22:13). The lamb is more aesthetically pleasing and sweet, but it is not which the animal the Bible says appeared.

4. Saul – he’s #1. In the biblical account, King Saul goes into a cave to “relieve himself” when David cuts off a piece of his robe and spares his life. The Hebrew word here is clear that the Israelite king was defecating (1 Samuel 24), but the television show portrays Saul urinating. The latter act is more viewer-appropriate, but technically inaccurate.

5. Jeremiah, the escape artist. When the Babylonians destroy Jerusalem, a wild-eyed Jeremiah escapes undetected by the invading army. According to the scriptures, however, Jeremiah was captured, bound in chains, and later released (Jeremiah 40:1). Additionally, the television show tells of Daniel and his three compatriots being captured during the siege, when in fact, they were deported more than a decade after Jerusalem’s destruction (Daniel 1; 1 Kings 24:10-16).

6. Cyrus and the lion’s den. The Bible says the prophet Daniel was thrown into the lion’s den during the reign of Darius (Daniel 6). In the television show, however, Cyrus is still in power.

7. Jesus’ birth…how romantic. The birth of Jesus has been romanticized in Western accounts, many added details have no root in scripture. The television show riffs on the popular version with the pregnant Mary riding to Bethlehem on a donkey pulled by Joseph. The Bible never mentions a donkey, and it almost certain that they would have travelled there in a caravan with their family and friends in tow (Luke 2).

8. Wise men, yes. But punctual, no.  Consistent with the romanticized but fictional tale of Jesus’ birth, the television show depicts three wise men riding camels to visit the newborn babe. But the Bible never says how many magi there were. And though the wise men arrive at the same time the shepherds do in the series, they visit the infant Jesus later in the Biblical account (Matthew 2:1-12).

9. John the Baptist’s girl problem.  In the show, John is arrested and executed because he is stirring up trouble preaching about a Messiah that would deliver the Jews from Roman oppression. In the Bible, Herod was actually a fan of John’s preaching (Mark 6:20). He arrests John because he is preaching about Herod stealing his brother’s wife. But even then he is not executed. That is, until Herod’s wife and step-daughter get revenge by requesting his head on a platter (Mark 6:21-15).

10. Jump, Jesus, jump. The desert temptation is one of the most dramatic stories in The Bible–both the series and the scriptures. But the television show has Satan taking Jesus to a cliff where he tempts Jesus to jump off. The Biblical account says Jesus was taken to the pinnacle of the temple (Matthew 4:5-7).

News
Plaintiffs propose replacing Bible with Book of Faith
Follow us on Facebook!
Submit your photos to RNS