(RNS) He came to Jesus at night, sneaking off to meet the man behind the miracles.

He was a powerful Pharisee, a member of the Sanhedrin, the Jewish ruling council. He wasn’t supposed to mix with the motley lot that followed Jesus. 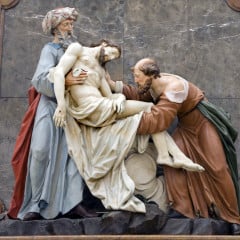 Deposition from the Cross from Vienna church – Nicodemus and Joseph of Arimatea. Photo courtesy Shutterstock (http://shutr.bz/15W6boY)

But Nicodemus had to know: Was the charismatic Galilean for real?

Jesus’ answers in the Gospel of John are among his most famous teachings: Nobody can see the kingdom of God unless they are “born again,” he told Nicodemus. And God so loved the world that he gave his only son to save it.

Those words remain widely cited — witness the legion of John 3:16 signs at sporting events — but the man they are spoken to, Nicodemus, remains somewhat of a mystery.

To blacks after the Civil War, he was a model of rebirth as they sought to cast off their old identity as slaves. In the Eastern Orthodox and Catholic churches, Nicodemus is a saint. Some modern Christians continue to call him a hero for defending Jesus before the Sanhedrin and helping give him a proper burial. But others Christians call him a coward who kept his faith concealed.

The Bible tells us little about Nicodemus — good or bad.

He’s only mentioned three times in the Gospel of John. There’s the nocturnal meeting with Jesus, which Bible scholar Ben Witherington calls “Nick at Night” to help his students remember the encounter. Later, Nicodemus reminds the Pharisees that under Jewish law, Jesus should be granted a hearing before he’s condemned. Finally, Nicodemus brings ointments to assist in Jesus’ burial.

“The Bible” miniseries on the History channel that ends Easter Sunday (March 31) assigns Nicodemus a larger role, casting him as Jesus’ chief foil among the Jerusalem Pharisees. He chastises Jesus for overturning the money-changers’ tables and tries to trap him with a question about taxes, eliciting the famous “render unto Caesar” response.

Before Nicodemus, most of Jesus’ followers had been “simple folk,” writes Pope Emeritus Benedict XVI in his book “Jesus of Nazareth: Holy Week.” Nicodemus and Joseph of Arimathea were “two highly regarded representatives of the educated class of Israel who had not yet dared to profess their discipleship,” the former pope writes. 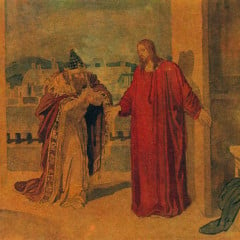 Writer Joy Buchanan said she found spiritual and intellectual joy in imagining Nicodemus’ journey from the Jewish ruling council, to skeptic, to the foot of the cross.

“I thought it would be neat to explore a possible path for this guy,” Buchanan said. “What brought him to Jesus that night to ask honest questions?”

Buchanan’s 2011 novel, “Nicodemus,” portrays the Pharisee as a learned scholar enthralled by a woman who, like Jesus, puts love before the law. Her illness spurs Nicodemus to seek out Jesus, who was gaining fame for his dramatic healings.

Buchanan, an evangelical Christian and graduate student of economics in Northern Virginia, said Nicodemus can speak to an age awash in information but parched for spiritual wisdom.

“He’s a character that modern Christians can relate to because of his education, and the way he thinks, and the way he wants a clear-cut answer from Jesus,” Buchanan said. Jesus’ enigmatic response — that individuals must be “born again” — puzzled Nicodemus, and continues to challenge Christians.

“Jesus used a phrase that is very meaningful, but also very hard to understand,” Buchanan said.

Nicodemus might not be on the minds of many modern evangelicals, but they care deeply about his conversation with Jesus in John’s Gospel, said Timothy Larsen, a professor of Christian thought at Wheaton College in Illinois. Most consider being “born again” essential to salvation and a hallmark of their faith.

“Evangelicals have traditionally cared a lot about when this happened,” Larsen said of the born-again experience. “It is the hinge moment in a person’s life.” When Chuck Colson moved from Nixon hatchet man to evangelical eminence, he titled his autobiography “Born Again.”

Well before Colson, the freed slaves who moved to Nicodemus, Kansas, after the Civil War sought rebirth as well, argues scholar Rosamond Rodman.

Many scholars have assumed that the town, which was founded by African-American ministers, was named after a former slave named Nicodemus. But the town’s founders had ample reason to honor the biblical figure, Rodman argues.

Slave owners often forbade blacks from reading the Bible, fearful that they might question the scriptural sanction of slavery. “Nicodemus comes to Jesus in the same way African-Americans came to the Bible: at night and in secret, understandably afraid of the consequences,” Rodman writes.

But the story of Nicodemus ends not in darkness but in light, according to Benedict and other Christians.

After the apostles have fled, it’s Nicodemus who walks up Golgotha with Joseph of Arimathea on Good Friday, bringing balm to bury Jesus, in full view of the Jewish and Roman authorities.

“The quantity of the balm is extraordinary and exceeds all normal proportions,” writes Benedict. “This is a royal burial.”