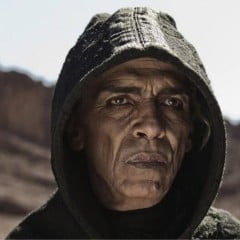 Satan in the miniseries “The Bible.” Photo courtesy of The History Channel.

(RNS) When some people recently started questioning whether the Satan character on “The Bible” miniseries resembled President Obama, others posed a broader question: Why does Satan need to be dark-skinned at all?

Religious experts and historians say the controversy points to a centuries-old tradition where dark is bad, light is good.

“It’s just part and parcel of the stereotyping and the encoding of dark and black, particularly of African descent, as negative in American popular culture,” said the Rev. Paula Matabane, an African Methodist Episcopal minister and associate professor of television and film at Howard University.

Scott Poole, author of “Satan in America: The Devil We Know,” says the linking of Satan and race predates American history.

European folklore described Satan as a black man, and the Puritans imported these notions, and raised them during the Salem witch trials of the 1690s.

“That’s an idea that the Puritans brought with them from England to New England,” said Poole. “They actually had a tendency to identify all racial others with satanic powers, satanic control.” 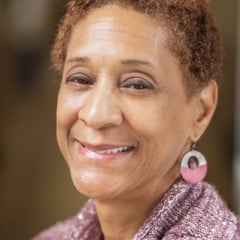 Roma Downey and Mark Burnett, the husband-and-wife executive producers of the History channel miniseries that concludes on Easter Sunday (March 31), swiftly rejected the Obama comparison, calling it “a foolish distraction” and noting their “highest respect” for the president.

“The series was produced with an international and diverse cast of respected actors,” the History Channel added in a statement. “It’s unfortunate that anyone made this false connection.”

Entertainment writers noted that makeup artists made Moroccan actor Mohamen Mehdi Ouazanni look darker than he usually is, with one comparing his usual visage to Omar Sharif or David Niven.

Stephen Thorngate, an associate editor for Christian Century, was one commentator who said the hubbub about Obama “isn’t the point.”

“Just don’t give the ultimate good guy fair skin and the ultimate bad guy darker skin,” he said. “We’ve been down that road too many times before.’’

Time columnist James Poniewozik noted that the Bible lacks descriptions of Satan — just as it doesn’t dwell on the color of Jesus’ skin.

“Whether or not they intended to make Satan look like Obama, they did intend to make him a dark-shrouded bogeyman,” he wrote. “And that’s the real sin here.”

“In that kind of high-water mark of American white supremacy, even the tempter in the Garden of Eden is referenced as an African man or woman who is soulless,” said Edward Blum, co-author of “The Color of Christ.”

Jumping ahead a century, there’s another Hollywood example of a negative biblical character: African-American actor Carl Anderson portrayed the role of Judas in the 1973 movie “Jesus Christ Superstar.” 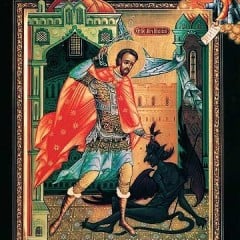 “That caused a great deal of controversy,” said Blum, whose book noted protests from black Baptists who were upset that Jesus’ betrayer was depicted as a black man.

Robert Thompson, professor of television and popular culture at Syracuse University, said Anderson’s role was an “exception” for Hollywood depictions of Judas. But white actors tend to be cast as what would be considered the good guys of the Bible.

“There’s been a tradition that an awful lot of the heroes of the Bible have been played by light-skinned European Americans, including oftentimes, Jesus, who looks much like he may have come from northern Europe than down Israel way,” he said.

In Mel Gibson’s 2004 “The Passion of the Christ,” Satan was depicted as an androgynous albino figure. “I believe the Devil is real, but I don’t believe he shows up too often with horns and smoke and a forked tail,” Gibson told Christianity Today.

Cain Hope Felder, professor of New Testament language and literature at Howard University, said the Satan depiction in the recent miniseries was disappointing given the more multicultural depictions of biblical figures seen in recent decades.

He was the general editor of the Original African Heritage Bible, which in 1993 included images of Jesus and his disciples as people of color. That was followed in 1999 by the African American Jubilee Edition of the Holy Bible, which includes depictions of a black Jesus on the cross and in the arms of Mary.

“It’s unfortunate that the producers of this show made this terrible error,” Felder said. “They either should have taken Satan off the screen entirely and just had a voice or something. Or if you’re going to use him, he should certainly not have been black.”