(RNS) Is the New Testament missing a few books? In a move that may seem heretical to some Christians, a group of scholars and religious leaders has added 10 new texts to the Christian canon.

The work, “A New New Testament,” was released nationwide in March in an attempt to add a different historical and spiritual context to the Christian scripture. 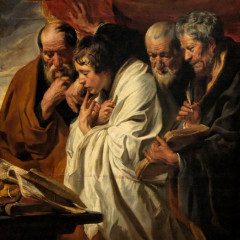 Some of the 10 additional texts — which have come to light over the past century — date back to the earliest days of Christianity and include some works that were rejected by the early church.

“(The texts seem) so nurturing and inspiring to people’s spiritual journeys. It’s also important for the public to see a broader picture of early Christianity,” said Hal Taussig, a biblical scholar and pastor who chaired the council.

Taussig is a visiting professor of New Testament at Union Theological Seminary, professor of early Christianity at the Reconstructionist Rabbinical College and co-pastor at Chestnut Hill United Church in Philadelphia.

Taussig, a fellow of the Jesus Seminar, which sought to piece together an accurate historical account of Jesus’ life that downplayed his divinity, said he hopes the project gives the ancient texts new life beyond the rarefied world of biblical scholarship.

Even though he’s not suggesting that people see the texts as authoritative theology, perhaps not surprisingly not everyone admires the project.

“These texts that Taussig adds come from a different time period than any New Testament document, and they represent a fundamentally different worldview.”

New Testament scholars are divided on their understanding of early Christian texts in relation to what actually made it into the New Testament. Many disagree on the dates of different texts, the validity of such sources and the relevancy of noncanonical texts to biblical materials.

While Taussig said he doesn’t believe the New Testament is incomplete, he thinks that the new material “elucidates it and expands it.”

In the book’s preface, Taussig wrote that parts of the New Testament are “offensive and outmoded,” citing verses that tell slaves to obey their owners (1 Peter 2:18) or wives to submit to their husbands (Ephesians 5:22), or passages that refer negatively to Jews (John 8:44).

Jones said that although several of Taussig’s chosen texts bear the names of apostles, “none of them was widely thought to be an authentic text from any first century apostle.”

Texts included in “A New New Testament” are the Gospel of Thomas, the Gospel of Mary Magdalene, the Acts of Paul and Thecla and others, along with pieces of poetry and prayers.

“I trust those writers who were closer to the events in Jesus’ life — that is, Matthew, Mark, Luke and John — to provide us with a more accurate look at what his life, death and resurrection were like,” said the Rev. James Martin, a Jesuit priest and author.

“If you read those other texts against the four Gospels, you can see pretty clearly why the church chose those four,” he said.

Martin, however, said that there may be valuable information in the additional texts even if they never gained the church’s official stamp of approval.

Despite disagreement surrounding the early documents, there is interest in texts that lie outside of biblical canon.

“I see a lot of curiosity among people about documents that didn’t make it into the New Testament,” said Greg Carey, a New Testament professor at Lancaster Theological Seminary, which is affiliated with the United Church of Christ.

The revised New Testament “could serve people a way into exploring the texts,” he said.

Karen King, a respected scholar of early Christianity at Harvard University who worked with Taussig on the panel, said she thinks the new texts add historical depth to the New Testament.

“I think that this book will help people understand the rich diversity of early Christianity more than they have in the past,” she said. “You can see more of the richness of the debates by looking at more literature from that time.”

The council behind “A New New Testament:”

Margaret Aymer — Associate professor of New Testament and area chair of biblical studies at the Interdenominational Theological Center in Atlanta, Ga., and a minister in the Presbyterian Church (USA).

Sister Margaret Brennan — Member of the Sisters, Servants of the Immaculate Heart of Mary and former president of the Leadership Conference of Women Religious.

Bishop Susan Wolfe Hassinger — Retired bishop of the United Methodist Church and the bishop-in-residence and a lecturer at Boston University School of Theology.

Mark Singleton — Professor at St. John’s College in Santa Fe, N.M., and an expect on yoga.

Sister Nancy Sylvester — Member of the Sisters, Servants of the Immaculate Heart of Mary and former president of the Leadership Conference of Women Religious.

Rabbi Arthur Waskow — Director of the Shalom Center in Philadelphia and a leader in Jewish renewal and peace movements.