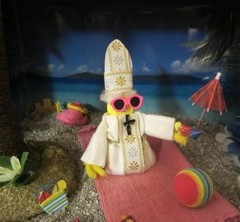 Today is Maundy Thursday, when Christians commemorate the Last Supper and the washing of the Apostles’ feet.

Some churches plan to hold somber tenebrae services; others reenact the foot-washing, which can be an awkward but powerful ritual.

Pope Francis is scheduled to celebrate Mass and wash the feet of juvenile delinquents – Muslims and women among them – at a detention center in Rome.

On Wednesday, Francis urged Catholics to leave their comfort zones and search for “lost sheep.”

Sounds like Cardinal Dolan of NY took that advice to heart, communing with inmates yesterday in a prison chapel.

As usual, Dolan came equipped with a one-liner. “I love to say Mass in a prison,” he said. “Nobody ever comes late and nobody ever leaves early.”

Yesterday, of course, the Supremes danced around DOMA, seeming to search for a way to avoid ruling on gay marriage itself, as our own Kevin Eckstrom reports.

Mark Silk says there will be plenty of grumbling if the Supreme Court decides anything less than marriage equality, but it won’t take another 40 years to get there.

Jim Garlow, an evangelical pastor and opponent of same-sex nuptials, said “there isn’t that much interest in commitment and monogamy” in the gay community. He might have missed our slideshow of the scene outside SCOTUS.

With Easter on the horizon, one in five Americans don’t know if they’ll attend a worship service on Sunday, according to Lifeway Research. Nearly 40 percent say they don’t plan to be in church on Easter.

Maybe they’d rather meet Jesus at night, like Nicodemus, the mystery man of Holy Week.

Pope Francis seems to be in denial about his papacy, the AP reports. He still goes by Bergoglio when speaking to friends and refuses many papal perks.

Still, he’s turned Argentina’s president from a foe to friend. Some Catholic MP’s in Britain want the pope to ordain married men as priests.

A federal court in Alabama dismissed EWTN’s suit against the Obama administration’s contraception mandate, saying the mandate’s rules are not final yet.

Ireland is home to a growing church-state conflict over abortion.

Kentucky lawmakers voted to override the governor’s veto of a bill that they say will better protect religious freedom.

A young Mormon man says he was not permitted to serve as a missionary because he backs gay rights.

A Florida college has apologized for a professor who told students to write “Jesus” on a piece of paper and stomp on it.

The Catholic League wants HBO to take Bill Maher to the woodshed over his criticism of Catholic priests.

A “Save the Bubbes” project aims to preserve Jewish grandmothers’ recipes.