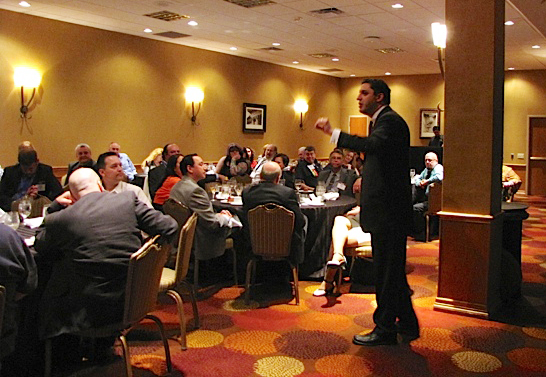 AUSTIN, Texas (RNS) For someone who was once dubbed "the most hated woman in America," Madalyn Murray O’Hair is getting a lot of love in this city she once called home. 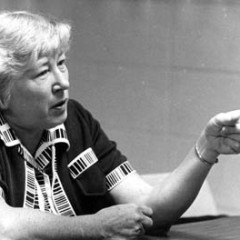 Ten years after her mysterious disappearance in August 1995, the legacy of activist Madalyn Murray O'Hair still influences atheists in America today. She was known for her role in the landmark 1963 Supreme Court decision in Murray vs. Curlett, which, combined with Abington vs. Schempp, ended prayer in public schools across the U.S. and turned her into the self- described ``most hated woman in America.'' She is depicted here in a Religion News Service file photo from the 1970s.

New Jersey-based American Atheists, the group O’Hair founded here in 1963 to further the separation of church and state, is marking its 50th anniversary with a three-day convention that's expected to draw more than 900 people in its former hometown.

There's O’Hair memorabilia up for auction, including a doll made in her grandmotherly image and a sampler she stitched and signed. Attendees were given T-shirts that bear one of her quotes: “An atheist believes that a hospital should be built instead of a church. An atheist believes that deed must be done instead of prayer said. An atheist strives for involvement in life and not escape into death. He wants disease conquered, poverty vanished, war eliminated.”

But the annual Easter weekend convention is more than an in-your-face slap at religious America. It is also a delicate balancing act between past glories and future goals, and a search for the fine line between the group’s image as the angry bulldog of secular organizations and its need to attract younger nonbelievers, including many who do not see religion as a foe. David Silverman, president of American Atheists, addresses the Reason Rally on March 24 on the National Mall in Washington. RNS photo by Tyrone Turner

'We are the grumpy atheists'

“We are the bad guys,” American Atheists President David Silverman said to about 80 people at a pre-conference dinner overlooking Lady Bird Lake on Thursday (March 28).

“We are the grumpy atheists who say you can’t use dead cops as a shield to put up a cross at Ground Zero and the fact that you are religious shouldn’t get you out of paying taxes.”

Being the grumpy bad guy is in the organization’s DNA. O’Hair gained notoriety as the mother of the plaintiff in Murray v. Curlett, the 1963 Supreme Court case that ended Bible recitation in public schools. Over the next 30 years, she filed dozens of lawsuits against everything from "In God We Trust" on U.S. currency to "one nation under God" in the Pledge of Allegiance.

At a time when people rarely admitted to nonbelief, O’Hair became the face of atheism for a generation. A year after she founded American Atheists, Life magazine gave her the “most hated” title and she embraced it until her death in 1995. She, her son and granddaughter were murdered by a former American Atheists employee after being forced to withdraw funds from organization accounts. Their dismembered bodies were found on a ranch south of Austin in 2001.

Silverman, who became president in 2010, also embraces the role of provocateur, calling himself, “America’s loudest heathen.” He makes frequent radio and television appearances where he happily challenges religious symbols on public land, tax exemption for religious organizations and the inclusion of a cross in plans for the Ground Zero memorial.

“I do think there is a role for me that maybe I inherited from Madalyn,” he said before the convention. “It is to not be politically correct. If I don’t challenge the efficacy or the legitimacy of religion, nobody else will, and somebody has to challenge that.”

That challenge has potential pitfalls. American Atheists membership is 4,000, Silverman said -- a small sliver of the 2.4 percent of Americans who identified as atheists in a 2012 survey by the Pew Forum on Religion & Public Life. Less strident groups are larger: the Freedom from Religion Foundation claims more than 19,000 members, and the American Humanist Association claims 40,000. 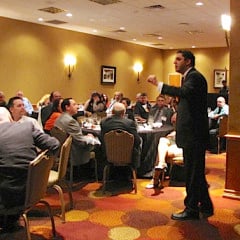 A 'forum to vent'

Phil Zuckerman, a professor of sociology at Pitzer College and an expert on secularism, said that while he applauds the passion and purpose of O'Hair's acolytes, they do not represent mainstream atheism.

“There is a place for American Atheists, definitely, but clearly, most atheists are not angry, do not hate religion and do not need a forum to vent,” he said. “I think the fact that their numbers are so low shows that the strident, aggressive version of atheism is a distinct minority.”

While he respects other “softer” nontheistic organizations, Silverman argues that his organization’s aggressiveness is critical to advancing the broader acceptance of atheism in the U.S.

“They do not serve the need of overtly defying religion to its face,” he said, ahead of his announcement Friday that the group plans to open its first-ever office in Washington. “We are smaller, but we need to be heard.”

One of the ways it does that is by filing multiple lawsuits. Recent targets include roadside crosses, the National Day of Prayer, a cross at Ground Zero and, of course, displays of the Ten Commandments and creches on public property. Some legal scholars say the short-term victories often result in rulings that are later overturned.

“American Atheists and the Freedom from Religion Foundation make a lot of bad law by exercising so little judgment about what claims they file,” said Douglas Laycock, a professor of law and religious studies at the University of Virginia.

“(It's) not clear whether any other tactics would be more effective. What they're doing doesn't seem to be helping. On the other hand, nonbelief is clearly increasing in numbers and visibility, and that is making a difference.”

Another challenge for American Atheists is that the “average atheist” is increasingly younger. Pew’s 2012 poll showed one-third of Americans under 30 are now religiously unaffiliated, an all-time high. Yet American Atheists -- and many other nontheist organizations -- remains largely white, male and older. 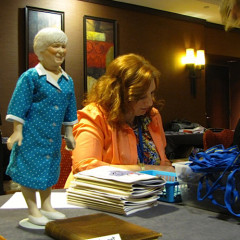 “It is a problem,” Silverman said. “I think what has to happen is that minorities need to be solicited to, they need to be pulled in, otherwise we will stay a white guy movement, and that is not representative of this country.”

To that end, American Atheists placed its first-ever Spanish language billboard in Austin this month -- not for the first time -- included African-American and Hispanic nontheists in its convention speaker lineup.