(RNS) More than half of Americans think the Bible has too little influence on a culture they see in moral decline, yet only one in five Americans read the Bible on a regular basis, according to a new survey.

More than three-quarters of Americans (77 percent) think the nation’s morality is headed downhill, according to a new survey from American Bible Society.

The survey showed the Bible is still firmly rooted in American soil: 88 percent of respondents said they own a Bible, 80 percent think the Bible is sacred, 61 percent wish they read the Bible more, and the average household has 4.4 Bibles. 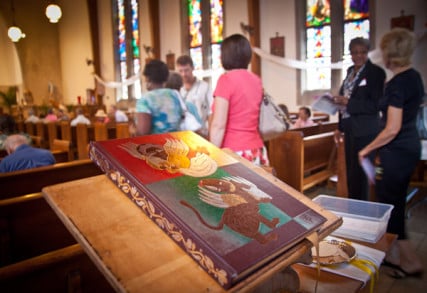 The Bible rests on a stand at the back of St. Therese Little Flower parish in Kansas City, Mo. on Sunday, May 20, 2012. RNS photo by Sally Morrow

If the Bible is so commonplace in America, wouldn’t its moral teachings counteract the downward trend? Almost a third of respondents said moral decline was a result of people not reading the Bible, while 29 percent cited the “negative influence of America” and one in four cited corporate corruption.

Doug Birdsall, president of American Bible Society, said he sees a reason for why the Bible isn’t connecting with people.

“I see the problem as analogous to obesity in America. We have an awful lot of people who realize they’re overweight, but they don’t follow a diet,” Birdsall said. “People realize the Bible has values that would help us in our spiritual health, but they just don’t read it.”

If they do read it, the majority (57 percent) only read their Bibles four times a year or less. Only 26 percent of Americans said they read their Bible on a regular basis (four or more times a week).

The Rev. James Martin, a Jesuit priest and author of “The Jesuit Guide to (Almost) Everything,” said the Bible can come across as intimidating to the uninitiated. “There’s a tendency to think that if you read the Bible, you have to read it from start to finish. But when people do read the Bible, they don’t know where to begin,” Martin said.

Younger people also seem to be moving away from the Bible. A majority (57 percent) of those ages 18-28 read their Bibles less than three times a year, if at all.

The Barna Group conducted “The State of the Bible 2013” study for American Bible Society, using 1,005 telephone interviews and 1,078 online surveys with a margin of error for the combined data of plus or minus 2 percentage points.