(RNS) From the very first moment of his unexpected election as Pope Francis, Cardinal Jorge Bergoglio of Argentina has embraced a series of small departures from established tradition. 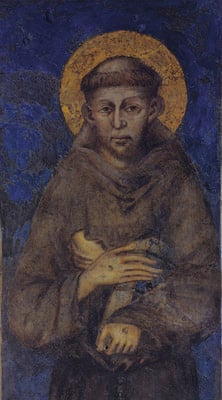 He took his papal name from a great nonconforming saint of the Middle Ages — and one that no other pope in the history of the Roman Catholic Church has taken. He then refused to stand on an elevated platform that would separate him from his “brother cardinals,” and asked the people of Rome to bless him rather than receive his blessing. He even insisted on returning to his hotel to settle his account (as though his credit were in any doubt).

Everyone who knew Bergoglio saw in him an unconventional and even unpredictable figure. He lived in Buenos Aires in a modest apartment rather than in the archbishop’s palace. He dispensed with a private limousine and took public transportation to work. He even cooked his own meals at home in his own kitchen.

Now, as pope, he has continued this pattern by ignoring long-settled traditions of what a pope should wear, where he should reside, and how he should conduct himself in public functions. Francis has chosen not wear the gold papal cross to which he is entitled, instead wearing the more simple cross he wore in Argentina. He also seems satisfied with normal men’s footwear, avoiding the elegant red loafers Pope Benedict normally wore in public.

Of course, not every surprise move by Francis was universally hailed. Vatican insiders were not fully prepared for the pope’s refusal to occupy the papal apartments, and they were surprised by his determination to include two women in a foot-washing service during Holy Week. The fact that one of the women selected was Muslim did not make matters easier to explain to some traditional Catholics.

Admittedly, Pope Francis could be nothing more than an oddity, holy but eccentric. But it would be a mistake to conclude from his first unprecedented actions that he is, in principle, disdainful of Catholic tradition.

On the contrary, the new pope seems attuned to very specific Catholic traditions of church reform that claim his attention and color his vision of genuine Christianity.

First in his list of church reformers is St. Francis of Assisi, whose name he bears as pope. In his early years, St. Francis was an unlikely candidate for sainthood. He had been a soldier and a privileged member of society, inheriting great wealth from his father. Yet Francis’ adult conversion to serious Christianity turned his world upside down.

St. Francis divested himself of all his wealth — or, as he put it, he married a widow named Lady Poverty. He did not enter a cloister as an earlier generation might have done, but sent his disciples into the villages of Europe to preach, to live a life of holiness, and to embrace Christ’s poverty, following a Lord who had nowhere to lay his head.

It was a formula, as St. Francis saw it, for the renewal of a church “in ruins.”

St. Francis took sound teaching and holy living out of the cloister and down from the city and scattered it across the countryside. It was an old idea — as most good reform ideas are — and it put teaching, preaching, holy living, and voluntary poverty into a potent combination that confronted and confounded skeptics and believers alike.

Sharp thinking and blameless living overcame any credibility gap that the church might have suffered, and it led nominal Christians to a re-engagement with serious Christianity. Put another way, the goal of Franciscan renewal was a church that knows the right thing to say and has earned the moral right to say it.

Admiring the work of St. Francis means admiring a lively (and effective) tradition of Catholic reform. The new pope, like St. Francis himself, has inherited problems that can in fact offer a fresh opportunity for renewal. Or not.

Under the circumstances, it is not at all surprising that Pope Francis prefers a modest guest house in the Vatican to the papal apartments he was offered. Any genuine disciple of St. Francis would, of course, agree.

(David C. Steinmetz is the Kearns Distinguished Professor Emeritus of the History of Christianity at Duke University.)