(RNS) A man who went from being a priest in rural Kansas to a prisoner of war in Korea will be posthumously awarded the Medal of Honor on Thursday (April 11).

But that’s not the only major recognition the Rev. Emil Kapaun has — he is also a candidate for sainthood in the Roman Catholic Church. 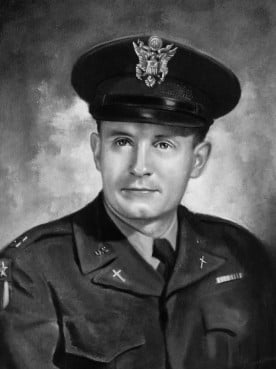 President Obama will present the nation’s highest military honor to Kapaun’s next of kin to commemorate the Army chaplain’s acts of personal bravery during the Korean War, both on the battlefield and in a POW camp.

For years, POWs who survived the camp have pushed for Kapaun’s wartime actions to be recognized. Now, it seems they’ve been heard on multiple fronts.

Despite the high honors, Kapaun’s story began much more humbly, half a world away from where he would encounter the horrors of war. He was born April 20, 1916 in the small town of Pilsen, Kan., about an hour and a half outside of Wichita.

At age 24, he was ordained a priest of the Diocese of Wichita. Four years later, he joined the U.S. Army Chaplain Corps. Kapaun left the Army in 1946, returned in 1948, and left for Japan and Korea in 1950 with the 8th Cavalry Regiment of the 1st Cavalry Division.

For the most part, the soldiers didn’t have much use for the chaplains — they could be preachy and liked to point fingers. But they respected Kapaun.

“The guy hardly ever pushed religion on anybody,” said Roy Wenzl, a Wichita Eagle reporter and the co-author of Kapaun’s biography.

Kapaun worked alongside other soldiers, digging latrines and foxholes. And he risked his life time after time to save the fallen.

Kapaun saw several battles during the war, and in each one he would run outside the perimeter to save wounded soldiers, despite pleas from his fellow soldiers to remain in safety. But during the Battle of Unsan, Kapaun’s regiment was surrounded by a sea of Chinese soldiers. Kapaun refused to escape and leave the fallen Americans, and was captured on Nov. 2, 1950. 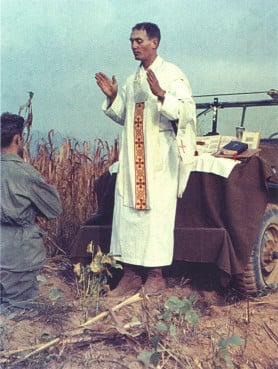 Kapaun found a wounded Chinese officer and convinced the man to help negotiate the remaining American soldiers’ surrender. Then when a Chinese soldier was about to execute an American, Kapaun knocked his gun away and saved the man.

The Americans were forced to march, with little to no food, in sometimes sub-zero temperatures, to what is now North Korea. They ended up in the Pyoktong POW camp.

Inside the camp, hunger, disease and the cold preyed upon hundreds of soldiers. Dysentery ran wild and the inmates’ only option for water was melted snow.

Despite the miserable conditions, Kapaun flouted camp rules to aid his fellow prisoners, stealing food and medicine, praying with them and shaping containers out of roofing tin to boil water.

“He led by example. He picked lice off of soldiers when no one else would,” Wenzl said.

Kapaun eventually had to stop caring for others due to his own illness. When his condition worsened, camp guards took him to a ramshackle hospital the POWs called “the death house” where he received no care.

“Hey, Mike, don’t worry about me,” he told Lt. Mike Dowe, as Dowe recalled to The Associated Press. “I’m going to where I always wanted to go and I’ll say a prayer for all of you.”

As the Chinese guards were taking him, Kapaun blessed them and asked for their forgiveness. Two days later, on May 23, 1951, he passed away, seven months after arriving at the camp. 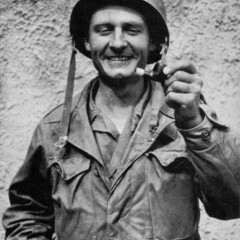 President Obama will present the nation’s highest military honor to Rev. Emil Kapaun’s next of kin to commemorate the Army chaplain’s acts of personal bravery during the Korean War, both on the battlefield and in a POW camp. RNS photo courtesy Raymond Skeehan/ Diocese of Wichita

He was one of just 11 military chaplains who have died in the line of duty since World War II.

But his memory lived on among the POWs whose lives Kapaun saved. Wenzl traveled the country talking to POWs who had survived the camp while writing a series about Kapaun for the Wichita Eagle.

“Combat veterans are pretty reluctant to talk about (their experiences),” Wenzl said. “But this was a pretty dramatic exception. They all wanted to talk about him. They regarded him as a heroic figure, the greatest person they ever knew.”

In 1993, the Vatican declared Kapaun “Servant of God,” which officially opened his sainthood cause.  As his cause proceeds, the Vatican will have to find proof of two posthumous miracles connected to Kapaun’s intercession in order for him to be named a saint.

The Diocese of Wichita is also petitioning to have Kapaun declared a martyr for the faith, which would fast-track him straight to beatification, requiring only one miracle to reach sainthood.