WASHINGTON (RNS) A candidate for sainthood in the Roman Catholic Church was posthumously awarded the Medal of Honor by President Obama Thursday (April 11) at the White House. 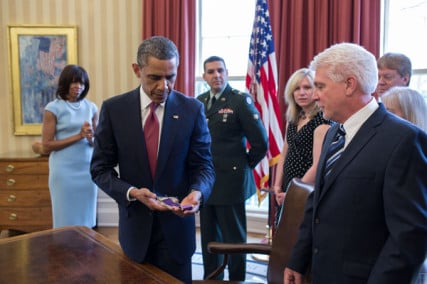 President Barack Obama holds Chaplain (Captain) Emil Kapaun’s Easter stole in the Oval Office during a greet with Kapaun’s family in the Oval Office, April 11, 2013. The President and First Lady Michelle Obama met with members of Chaplain Kapaun’s family before awarding him the Medal of Honor posthumously during a ceremony in the East Room. Official White House Photo by Pete Souza

The Rev. Emil Kapaun, a priest who served as an Army chaplain in the Korean War, was recognized for his bravery on the battlefield and in a prisoner-of-war camp.

During battles, Kapaun would run into enemy fire to save wounded Americans or comfort the dying. When he was captured and taken to a prisoner-of-war camp, he defied the guards in order to care for other soldiers, physically and spiritually, until he died in 1951.

“Father Kapaun has been called a shepherd in combat boots,” Obama said. “His fellow soldiers, who felt his grace and his mercy, called him a saint — a blessing from God. … I can’t imagine a better example for all of us.”

Several POWs who survived the camp also attended the White House ceremony. Ray Kapaun said that though he never knew his uncle, their stories have brought Emil Kapaun to life for him.

“If not for these men, I may not have had such a lifelong personal relationship with my uncle,” Ray Kapaun said. “I thank them dearly and honor them today for having the strength to survive.” 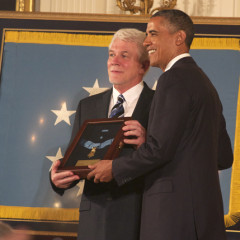 The POWs who survived the camp have been petitioning for the past 60 years to have Kapaun awarded the military’s highest honor. The Rev. John Hotze, who began the investigation for Kapaun’s sainthood in the Catholic Church, said the medal was a “long deserved recognition to his service to his fellow soldiers.”

In 1993, Kapaun was declared a “Servant of God,” the first step towards sainthood in the Catholic Church. For Kapaun to reach canonization, the Vatican must find proof of two miracles attributed to Kapaun’s intercession.

Opinion
Getting hip to Dimes Square Catholicism is the latest way to own the libs
Follow us on Facebook!
Submit your photos to RNS