(RNS) Richard Land, the evangelical culture warrior who was set to leave his job with the Southern Baptists after a series of controversies, will step down early to take over as head of a seminary in North Carolina that focuses on defending the faith in the modern world. 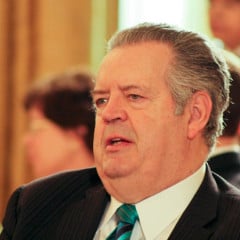 Richard Land, outgoing president of the Ethics & Religious Liberty Commission of the Southern Baptist Convention, was one of 150 religious leaders at the White House Easter Prayer Breakfast on Friday (April 5). RNS photo by Adelle M. Banks

“Over the years, it has become increasingly clear to me that the way you spell evangelism, discipleship, missions, and Christian education in the 21st century is ‘apologetics,’” Land, 66, said in a statement on Thursday (April 11) confirming reports that he would become head of Southern Evangelical Seminary in Charlotte, N.C., in July.

“My goal is to join with the SES family to produce an ever increasing number of graduates who will be the green berets and paratroopers of God’s army, and who will be used by him to win tremendous victories for Christ and His kingdom,” added Land, who has for years been the point man – and often lightning rod – on public policy issues for the Southern Baptist Convention.

Apologetics is a method of arguing on behalf of Christianity in order to evangelize and to defend the faith, and it is often marked by the sort of polemical style that Land perfected during nearly a quarter century as head of the SBC’s Ethics & Religious Liberty Commission.

Yet if Land’s willingness to mix it up in the public square contributed to his renown it also helped lead to his downfall: A year ago he made controversial comments about race and the Trayvon Martin shooting case that resulted in a reprimand from the SBC and the loss of his radio talk show. Land was also found to have lifted passages, without attribution, from another source for his radio commentaries.

Following those controversies, Land announced last summer that he would retire as head of the ERLC in October 2013 when he would have marked 25 years in that post.

But he has now opted to take the SES job, which will start on July 1 – and it will still provide him a chance to fight in the culture wars that he has described as “a titanic spiritual struggle for our nation’s soul.”

Southern Evangelical Seminary was founded in 1992 by Norman Geisler, a seminary professor and apologist, and Ross Rhoads, who was pastor of Calvary Church in Charlotte. The school has about 300 students and plans to expand its online education programs under Land’s leadership.

Last month the ERLC trustees elected Russell Moore, dean of the school of theology at the Southern Baptist Theological Seminary, to succeed Land.

Moore, 41, has indicated that he wants to bring a different tone to the job, saying he wants to “speak with civility and with kindness and in dialogue with people with whom I disagree.”