(RNS) No sooner had the reality of the Boston Marathon bombing sunk in on Monday (April 15) afternoon than Muslim activists in the U.S. began sending out a slew of news releases, tweets and Facebook messages urging prayers and aid for the victims – and condemning whoever was behind the horrific attack. 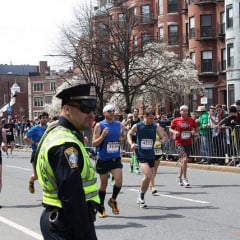 A Police officer stands by as runners pass during the 2013 Boston Marathon. Photo courtesy Sonia Su via Flickr (http://flic.kr/p/ebzEmM)

“American Muslims, like Americans of all backgrounds, condemn in the strongest possible terms today’s cowardly bomb attack on participants and spectators of the Boston Marathon,” Nihad Awad, executive director of the Council on American-Islamic Relations said in a statement on Monday.

It’s a familiar race against time for Muslim groups. Almost as soon as the smoke cleared around Copley Square, they knew from long experience that some would immediately point the finger of blame in their direction.

Many widely believed Muslims were behind the 1995 Oklahoma City bombing, until American militiaman Timothy McVeigh was convicted of the crime.

“We also call for the swift apprehension and punishment of the perpetrators,” Awad added, echoing a statement from the Muslim Public Affairs Council that called on “all of us as Americans to work together to bring those responsible to justice.” Speaking about the bombings on his ”700 Club” program, Pat Robertson was also furious: “Don’t talk to me about religion of peace” – the way Muslims describe their faith – “No way.”

On his show, conservative host Glenn Beck opined that “no American citizen blows up random people; that’s a Middle Eastern scene, that’s not an American scene. When our crazies go off, they target the government, not streets that are crowded with people.”

On Monday afternoon, the New York Post had to pull a story that reported that police had a Saudi suspect in custody. Later reports that a Saudi national’s apartment near Boston had been searched also raised anxieties among Muslims; the man, who was wounded in the bombing, was subsequently cleared.

“Discrimination against Muslims has been a real dynamic in the United States,” said Christina Warner, campaign director of Shoulder-to-Shoulder, a national interfaith alliance of Muslims, Jews and Christians who combat anti-Muslim prejudice. “We’ve already seen some reports falsely identifying the perpetrator as a Saudi individual when he was just a witness.”

“Obviously it’s a matter of concern,” said Naeem Baig, president of the Islamic Circle of North America, though he added that he has been impressed so far with the restraint shown by mainstream commentators.

“I see a very cautious and balanced approach from the media. It shows a lot of responsibility on their part, not jumping to conclusions,” he said.

“And the president and his statements were very balanced and mature,” Baig said. “Overall, politicians and the media have behaved responsibly.”

Yet if, in fact, Muslim extremists turn out to be associated in any way with the Boston bombing, then the fears in the Muslim community — and the efforts at damage control — will rise to a whole new level.

Already, Iowa congressman Steve King has drawn flack for suggesting that the possibility that a Saudi national was involved in the bombing would be reason enough to rethink immigration reform.

“If that’s the case, then we need to take a look at the big picture,” King, a Republican, told National Review Online. “If we can’t background-check people that are coming from Saudi Arabia, how do we think we are going to background check the 11 to 20 million people that are here from who knows where?”

On the flip side, members of King’s own party pushed back against that use of the Boston tragedy.

“We should really be very cautious about using language that links these two things in any way,” Sen. Marco Rubio of Florida told reporters on Tuesday. “We know very little about Boston other than that it was obviously an act of terror. We don’t know who carried it out or why they carried it out, and I would caution everyone to be very careful about linking the two.”