(RNS) Bob Gersztyn owned a fine collection of 300 rock ‘n’ roll albums in 1971, the year he accepted Jesus Christ as his personal Lord and Savior. Among them were some choice 1960s vinyl from Jimi Hendrix, the Beatles, Bob Dylan, and the Mothers of Invention. 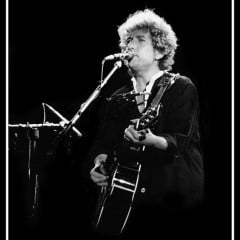 But all of a sudden, this was the devil’s music.

“I destroyed some of them with a hammer and took the rest to a used record store,” he recalled with a laugh. “I think I kept 10 classical music albums that I decided were not anti-Christian.”

Gersztyn retained his love of rock ‘n’ roll, but limited his listening to Christian rock, a genre that was just getting going in the era of the hippie-inspired “Jesus freaks” and the hit Broadway musical “Jesus Christ Superstar.”

He joined a Four Square Gospel Church in Los Angeles, enrolled in Bible college, and became a Pentecostal preacher. He also started emceeing and booking concerts for such Christian artists as Keith Green to 2nd Chapter of Acts. Bob Gersztyn put together his love of pop music and photography to publish an illustrated, two-volume work titled “Jesus Rocks the World — The Definitive History of Contemporary Christian Music.” Pictured here is the book cover for Volume One. Photo courtesy Bob Gersztyn

Today, at age 65, Gersztyn’s religious fervor has mellowed; he rarely attends church and calls himself “an allegorical Christian.” But he has put together his love of pop music and photography to publish an illustrated, two-volume work titled “Jesus Rocks the World — The Definitive History of Contemporary Christian Music.”

The book, totaling some 600 pages, traces the history of Jesus music from Negro spirituals, gospel, and blues to its modern-day roots in Southern California with the Calvary Chapel and Vineyard church movements in the 1970s.

It also tells the story of rock and folk stars who had “born-again” conversions, such as Bob Dylan; Noel Paul Stookey (of Peter, Paul, and Mary); and John Michael Talbot (of Mason Proffit).

Gersztyn, who grew up in a Catholic family in suburban Detroit, decided Jesus was the answer when he heard a radio account of how guitarist Jeremy Spencer had suddenly quit Fleetwood Mac during a performance at the Hollywood Bowl. It was soon learned that Spencer ran off with an infamous evangelical Christian sect called the Children of God.

Gersztyn, his mind altered by an estimated 100 LSD trips in the 1960s, convinced his girlfriend to head out to Southern California with him to join the Children of God.

“I was smoking pot one day when Jesus appeared to me in a vision,” he recalled. “He told me he was the source of all love, then said, ‘Come follow me.’”

Gersztyn, who wound up joining the Four Square Church rather than the Children of God, became part of an army of young people who went off seeking spiritual bliss after drug-induced mystical experiences in the 1960s and 1970s. Many of them found a home among the counterculture “Jesus movement,” also known as “the Jesus people.”

Today, the music born out of that movement has grown into a huge industry. Estimates of its annual revenue range from $500 million to $2 billion — depending on who does the calculating and what bands are included as “contemporary Christian.”

Take, for example, the mega-band U2. “They came out of the Jesus movement in Ireland,” Gersztyn said. “People think of them as Catholic, but their first albums were sold through Christian bookstores.” 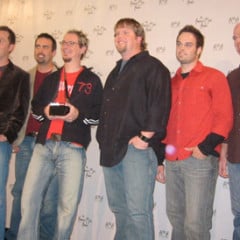 Members of the Christian music group MercyMe backstage at the American Music Awards ceremony Sunday (Nov. 14) in Los Angeles, where they were honored as Favorite Contemporary Inspirational Artist. Photo courtesy of The Media Collective

Today, Christian music includes popular bands like Third Day and MercyMe, and it’s hard to imagine a pop music genre that does have a “Christian” band.

“There are Christian death metal festivals in Norway,” Gersztyn said. “You have bands that sound like Rage Against the Machine, but they’re singing about Jesus.”

Gersztyn considers Christian country/rock musician Larry Norman, who died in 2008 at age 60, to be the single most important figure in the history of contemporary Christian music. He is remembered for his 1969 Capitol Records album “Upon this Rock,” and his song “Why Should the Devil Have All the Good Music,” which features the verse, “Jesus is the rock and He rolled my blues away.”

Gersztyn, who now lives in Salem, Ore., said his musical horizons widened in 1987, when he went to see a Bob Dylan concert in Eugene. Dylan, then in his evangelical Christian phase, was opening for the Grateful Dead.

“Most of the people were there to see the Dead, not Dylan,” Gersztyn recalled. “I was still really into the Christian thing, and being a minister, and didn’t want to get too close to the Deadheads because I thought God wouldn’t be happy about it.”

In his book, however, Gersztyn writes that the emotionalism and improvisational spirit that inspires a great Grateful Dead concert is not that much different than the Holy Spirit that drives parishioners to gospel music ecstasy in many African-American churches.

“In both instances,” he writes, “the experience is communal, with the audience or congregation being as much a part of the show as the performers.”